On Thursday, 19th June approximately two hundred residents of Nablus took to the streets demanding the Palestinian Authority (PA) take action to ease the suffering of the poor people in Nablus. Organised by the leftist parties – PPP; PFLP; and DFLP – residents marched through the city, chanting “Abbas and Fayyad: people want bread and peace!”. 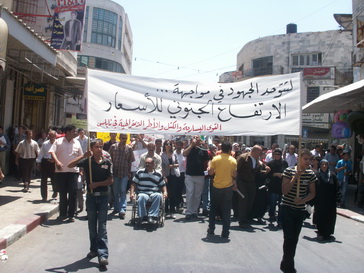 The protesters called on the Palestinian Authority to initiate subsidies on basic foodstuffs such as bread and oil for poor people in Nablus, where, according to the local government, there is over 70 percent unemployment, and 70 percent of families live under the poverty line. Demonstrators also called on the PA to subsidise the high cost of petrol in the West Bank, which, at six shekels per litre, is unaffordable for many; as well as the cost of water. 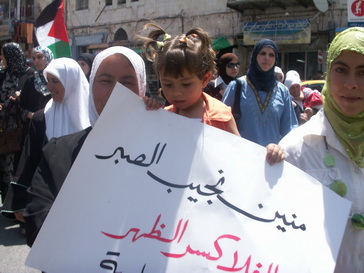 While the focus of the demonstration was on the responsibility of the PA to care for the people in the West Bank, it is clear that the primary cause of the widespread poverty and unemployment in Nablus is the occupation itself. Nablus, which was once the economic hub of Palestine, has now spiralled into an economic recession. Surrounded by checkpoints and roadblocks, businesses have fled the once booming city due to the difficulty of trade in the besieged city. Palestinian farmers regularly complain of the impossibility of getting their produce to markets in Nablus because of the checkpoints – by the time their loads have been cleared to enter, the produce is already unsalable. While there are extremely limited employment opportunities within the city itself, the cost for workers to reach other cities, such as Ramallah, in search of employment is also prohibitive, with a round trip costing a minimum of 26 shekels each day, largely due to the price of petrol – which is kept artificially high because of the taxes levied on it by the Israeli government. 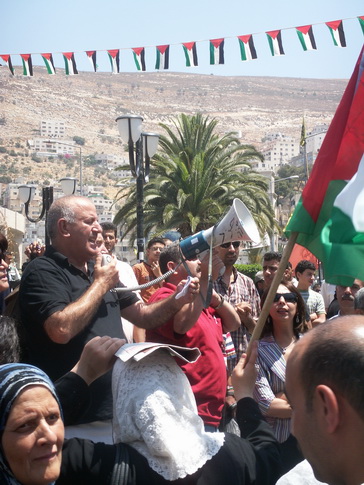 Nablus residents are not alone in their suffering – it is estimated that throughout the West Bank and Gaza, the average daily income is just $0.2. While the seige on Gaza has highlighted the plight the Palestinians there face, without access to clean water, fuel, basic foodstuffs, this situation is being replicated throughout the West Bank as well, but to a lesser extent. Countless villages face high unemployment; lack of access to water – or water prices that are hyper-inflated by Israeli authorities; regular curfews that cripple their economies as businesses are forced to close and residents stay in their homes. In the case of Hebron, the entire old city, the once-thriving hub of commerce in the south’s largest city, has become a ghost town due to the presence of belligerent Israeli settlers who have, through brutal intimidation and the support of Israeli military, forced the vast majority of businesses to close down. Shahuda street, once a main shopping thoroughfare, is now just a row of shuttered, empty shops. 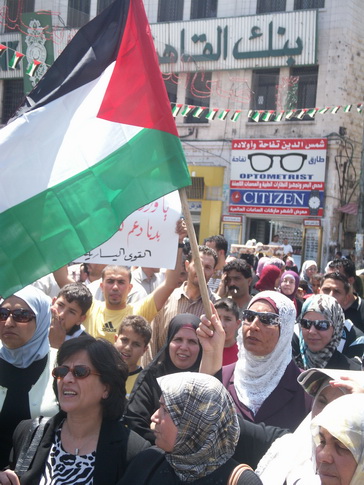 Regardless of fundamental causes, however, Nablus residents have vowed to keep protesting, demanding support from the Palestinian Authority to help ease their suffering.