New
Home / In the Media / PCHR: Eighteen years of work destroyed in less than four hours

In order to highlight the impact of the siege and closure of the Gaza Strip on the civilian population, the Palestinian Center for Human Rights (PCHR) is publishing a series of “Narratives Under Siege” on their website. These short articles are based on personal testimonies and experiences of life in the Gaza Strip, highlighting the restrictions, and violations, being imposed on the civilians of Gaza. To view all the narratives on the website, click here. 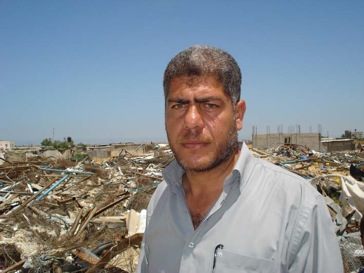 “They came at four in the morning, with two bulldozers, and they left before 8am. I own this chicken farm with my three brothers, and we worked day and night for eighteen years to build up our business. The Israelis destroyed everything in less then four hours.”

Nasser Jaber’s chicken farm was bulldozed by the Israeli Occupation Forces (IOF) ten days ago, in the early morning hours of May 16, while he was sleeping at home in Rafah, in the southern Gaza Strip. He still looks stunned. Wearily he guides us round the ruins of his eighteen-year business. “This was a lifetime project for me and my brothers” he says as we clamber over rubble, wire, shattered sheets of metal and thousands of putrefying chickens. “I have never belonged to any political faction, and I have never been to jail. I don’t know why they did this.” The farm workers who are starting to clear some of the rubble are all wearing facemasks. Forty thousand dead chickens lie smashed amidst the rubble and the stench is sickening.

When his workers raised the alarm that the chicken farm was being bulldozed, Nasser Jaber didn’t rush out to the farm, but stayed at home, waiting until the Israelis had finally left. “It would have been too dangerous to come to the farm while they were destroying everything” he says. “This is not the first time the Israelis have been here. The [Israeli] border is only two and a half kilometers away, and they invade this area every month. They had already destroyed one of our walls, and then the water tanks. But nothing like this.” One section of the chicken farm, a large barn containing 9,000 chickens, was spared the attack, though Nasser Jaber says the poultry are traumatized, and laying few eggs. The farm used to produce 45,000 eggs a day – now production is down to 2,000 eggs per day, and Nasser Jaber is worried the Israeli military may return to finish off what’s left of his farm. He estimates that between them, he and his brothers have already lost more than a million dollars. “I am a peaceful farmer” he says. “But they destroy our homes, our land – everything.”

Abdul Halim Abu Samra, Head of Public Relations at the nearby Khan Yunis branch of the Palestinian Centre for Human Rights, says the IOF is systematically destroying farm land in the Gaza Strip, especially in border areas. “We have good fertile agricultural land in Gaza, but Palestinian farmers have been driven off their land in these border areas by intimidation and attacks like this. The land is now almost empty a kilometer before the eastern border, because it is too dangerous for people to live and work there.”

As we drive north east towards Sofa Crossing (one of the eight crossings between Gaza and Israel) we see very few people, only an occasional elderly man leading a donkey and cart. These rural eastern border areas of the Gaza Strip are emptying, because farmers, many of whom have farmed here for generations, are now too frightened to live and work on their own land. The confines of the Gaza Strip, which is just forty kilometers long and ten kilometers wide, are being shrunk even further by relentless Israeli invasions.

The deliberate destruction of civilian property is illegal under international human rights law and humanitarian law, including the Fourth Geneva Convention (articles 33 and 53). Since the beginning of the second Intifada in September 2000, PCHR has documented the deliberate destruction of more than 40,000 donumms[1] of agricultural land in the Gaza Strip. This year alone, almost 3,000 donumms of agricultural land around Rafah and Khan Yunis have been destroyed by the Israeli military (including 500 donumms in the last seven days), ruining vegetable allotments and family owned farms, and contributing to the devastating economic destruction of the Gaza Strip.

Fifteen kilometers away from the remains of Nasser Jaber’s chicken farm, Mohammed Hamdan Abu Daggah is standing amidst the ruins of his cement factory, which lies four kilometers from Sofa Crossing, and was bulldozed by the IOF three days ago, on May 24. “I started this business in January 2007” he says. “My family invested everything in this factory. We managed to import good equipment under license, and we had lots of work from local clients, and the United Nations here in Gaza. But the Israelis arrived in three bulldozers, and they tore up everything.” Abu Daggah’s factory was employing forty local men who now have no jobs. Like Nasser Jaber, Abu Daggah says he has no idea why his business was targeted. “I have never been in any trouble and have never been arrested. They had absolutely no reason to do this – but now we have nothing left, except heavy debts that we cannot afford to pay.”