The village of Beita, 7 kilometres south-west of Nablus is currently closed to all traffic, after the Israeli army installed roadblocks on all of the roads leading into the village. The earth-mounds were installed three nights ago, in the early hours of Wednesday 9th April, during a large-scale invasion of the village, which coincided with the largest series of invasions and raids across the West Bank in months. 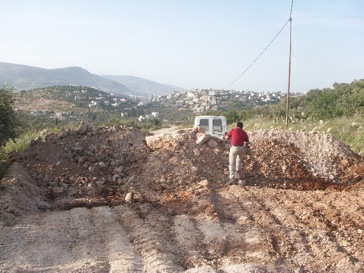 Invasions of the village have continued for the past three nights, with residents expecting another invasion tonight, 11th April. Six people have been arrested throughout the invasions, and approximately ten houses invaded and occupied by Israeli soldiers. Soldiers reportedly caused a great deal of damage to the houses they occupied, shooting water tanks, windows, breaking water pipes and other fixtures – much like the damage they inflicted during the invasion of 20th-21st February 2008. One house was occupied all day on Thursday 10th. Invasions have been marked by the shooting of live ammunition, tear gas and sound bombs, as well as the implementation of curfews at the entrance to the village. 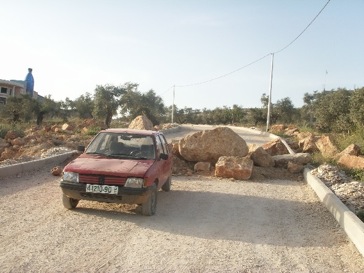 Soldiers guarding one of the roadblocks advised that the village will be closed until Sunday 13th April, in response to alleged shooting at a settler bus that occurred on Thursday 10th April near Beita, during which no one was injured. This is a clear example of collective punishment, illegal under international law, but a common practice of the Israeli army. Whilst the occupation is often justified by Israeli government spokespeople as necessary due to the lack of security offered by Palestinian Authority police, it is clear that incidents such as these shootings only attract Israeli army response if they are executed by Palestinians. No such collective punishment was evident following the recent murder of a shepherd by an Israeli settler bus driver near the village of Salim earlier this week, despite it being clear that the driver escaped to the illegal Israeli settlement of Elon Moreh.

Wednesday 9th April also marked the installation of a new permanent checkpoint in the Ar Ras area of Beita – along a main entrance to Beita and also in a strategically high position to enable easy monitoring of Beita by the Israeli army. The tent checkpoint was erected just weeks after Israel announced it would remove 50 of the 72 fixed checkpoints throughout the West Bank. This announcement was made in the spirit of supposedly facilitating greater freedom of movement for Palestinians, who are currently greatly restricted in this sense. The experience of residents of Beita, however, indicates the extent to which this announcement fails to translate into “facts on the ground.” As one resident expressed, “This is miserable.”