New
Home / Reports / Checkpoint 17, near Nablus, is opened, but still with restrictions

Checkpoint 17, near Nablus, is opened, but still with restrictions

On Monday 28th April, the Israeli checkpoint Assira ‘Ash Shamaliya, known as checkpoint 17, was opened for the first time in four years. The checkpoint, which separates the city of Nablus from the northern village of Asira ‘ash Shamaliya and other neighbouring villages, was the first of the promised fifty checkpoints to be removed around the West Bank. 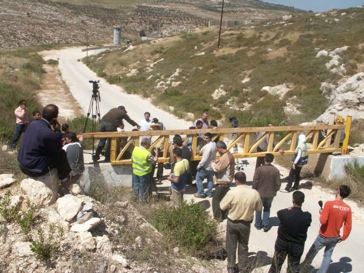 Local residents and press gathered around the closed road gate, eagerly awaiting its opening. Cars queued up to be amongst the first to pass through. 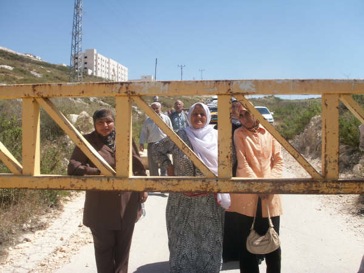 At 2:30pm two Israeli soldiers unceremoniously opened the locked gate, as jubilant Palestinians pushed against it, cheering as they did so. Drivers sounded their horns and the waiting people marched through clapping, reclaiming their road.

“People are happy the checkpoint is removed from here,” noted one local journalist, as cars streamed between the already disused checkpoint booths.

Even Israeli soldiers were taking photos of the momentous occasion, which serves as a publicity coup for the image of the Israeli government’s illegal occupation of Palestine, and works to counter the horrific child death-toll that is emerging from Gaza daily. Just that morning, four children were killed with their mother in Gaza’s Beit Hanoun as Israeli tanks shelled their house while they were eating breakfast.

Despite the fanfare surrounding the opening of the gate, the promise of greater freedom for residents of the Nablus district seems to be more image than substance. The road itself is not completely open now, it is open only from 6am until 10pm each day, after which both gates will be once again locked to all vehicles, including ambulances. When questioned about this one soldier replied “They can use the roads that they are using now.” 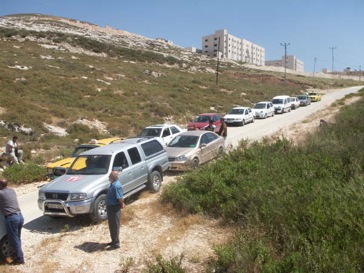 The road is also only open to drivers of motorised vehicles, such as cars, trucks, and motorcycles. It is prohibited to pedestrians and other forms of non-motorised transport. Indeed, within ten minutes of the opening, Israeli soldiers were harassing the celebrating populace, forcing people back into their cars, and insisting that women waiting for a lift to Assira go back to the city of Nablus and wait there. The logic for this prohibition was stated by one Israeli soldier as follows: “We want to make sure people stick to the road. This is the way we can make sure they stick to the road.”

The opening also provides a very limited increase in the freedom of movement for the people of Nablus. The road to Asira ‘ash Shamaliya serves only a few smaller villages, such as An Naqura, Sebastiya, Beit Imrin, Burqa, Yasid, Ijnisinya, Nisf Jubeil and Talouza – some of whom already utilise the already open road through Al Badan, which runs north from Nablus to Jenin. Whilst this opening will greatly improve the lives of residents in those villages – enabling them to travel to and from the city of Nablus more quickly and easily – it does nothing for the thousands of Palestinians who must travel each day through the major checkpoints of Huwarra and Beit Eba, where extensive delays and humiliations are endured daily. Indeed, it has been reported that in negotiations between Israeli and Palestinian authorities, the possibility of removing these checkpoints was completely dismissed.

Many residents are also cynical about the extent to which the road to Asira ‘ash Shamaliya will be “open”. “In half an hour they will be stopping cars and checking IDs, once the media leave,” mused one journalist.