Boy killed in hit-and-run on Israeli only road, Nablus

At approximately 5pm on Monday 7th April, a Palestinian shepherd boy was killed in a hit-and-run incident by an Israeli settler bus near the city of Nablus. The 15 year old boy, Sharif Badjas Ishtayeh, from the nearby village of Salim, was struck by the bus on road 557 – an Israeli-only road that connects Huwarra checkpoint with the illegal Israeli settlement of Elon Moreh. Seven of his sheep and one donkey were also killed, as the shepherd attempted to lead them across the road. 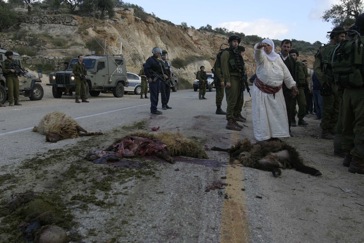 Witnesses report that the driver, heading towards the settlement Elon Moreh, hit the boy deliberately, and sped off afterwards, leaving him to die. Indeed, from the location of the bodies, it is evident that the boy and his flock were visible from at least 150 metres away, giving the driver plenty of time to avoid a collision. There is no indication from the evidence on the scene that the driver attempted to slow down at any time before or after the attack. 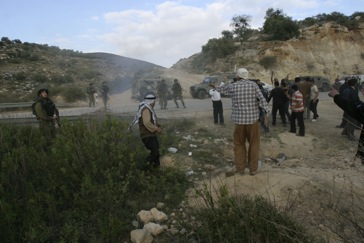 The identity of the Israeli driver is as yet unknown, as neither driver nor vehicle have been located since the incident.

Distraught Palestinian residents of Salim gathered at the road-side afterwards, by the slain bodies of the sheep. Clashes erupted between locals and Israeli soldiers, resulting in soldiers firing tear gas into the crowd.

The funeral for the boy was held during the night of 7th April, with most of the village turning out to mourn their latest victim of the Israeli occupation.