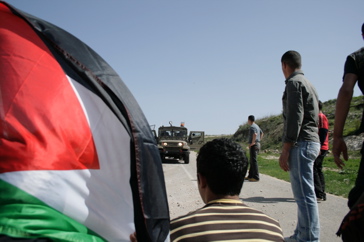 Friday, March 8th, saw a large demonstration in the West Bank town of Qaffin against the annexation wall. The demonstration was organised by the Qaffin municipality and featured a large block of activists from the Democratic Union. Approximately four hundred Palestinian and international demonstrators marched to wall to be met by two Israeli army jeeps. The soldiers initially fired live ammunition into the air and then in the direction of the protesters. Tear gas and rubber-coated steel bullets were then used to attack the non-violent demonstration. Three people were hit by the rubber coated bullets, but were not seriously injured. After an hour the protesters returned to the town. 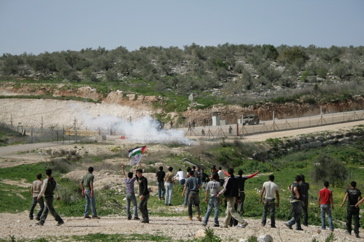 Qaffin, just north of Tulkarem has a population of around 10,000. The size of the town has more than halved in the last 13 years as settlements and the annexation wall have stolen the towns agricultural land. 120,000 olive trees are currently on the west side of the wall, and a further 12,000 were razed to make way for the walls construction. The Israeli army also regularly invade the town, and 280 of the towns population are currently in Israeli jails. 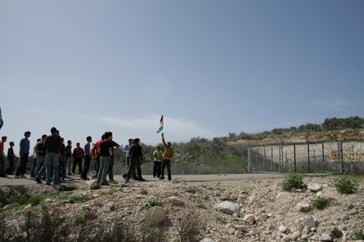 Dozens of residents of Bil’in, a village near Ramallah, took to the streets on Friday in their weekly demonstration protesting the illegal confiscation of the village’s land through Israel’s continued expansion of the wall.

The residents were joined by many International and Israeli peace activists, in addition to supporters of the Palestinian Democratic Federation Party (Fida), who were celebrating their eighteenth anniversary.

Protesters carried signs condemning the Israeli attacks on the Gaza Strip and others demanding the dismantling of the wall that is causing serious hardships for farmers in the village.

The protesters were stopped by Israeli soldiers at the pass-through gate of the wall and were prevented from reaching the land that has already been confiscated from their village. Israeli soldiers then used tear gas and sound bombs to disperse the demonstrators.

Palestinian youth participating in the demonstration responded by throwing rocks at the soldiers, who then began firing rubber-coated steel bullets. An Israeli peace activist, identified as Marina, and a Palestinian protester, identified as Naji Shouha, were moderately wounded by Israeli gunfire. Additionally, a number of Palestinians and Internationals were treated for tear gas inhalation.