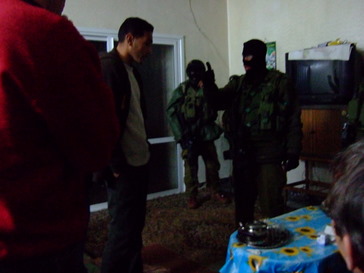 Israeli and international Human Rights Workers (HRW’s) from Hebron and Jerusalem were notified at 7pm on Monday Feb. 25 of two home invasions by the Israeli Occupation Forces (IOF) at the village of Beit Ommar which has been the location of repeated assaults and curfews by the Israeli military. The two homes were both reported to contain at-risk persons including an elderly man dependent on oxygen and a stroke victim in the other house.

The HRW’s made their way into the village and were directed to the location of the occupied homes by members of the community. The first arrivals waited at a nearby gas station until about 9 pm when a sufficient number of activists had arrived to approach the first house. All lights had been turned off by the IOF soldiers. A decision was made to approach the main doors on the second level of the home.

After knocking on the door repeatedly, the HRW’s saw a light come on from the inner living area. The front door was suddenly opened and two of the HRW’s were yanked through the door into the front entry room by armed Israeli soldiers with black balaclavas covering their faces. One of the HRW’s had a video camera out and operating and was immediately attacked by the IOF soldiers who attempted to forcibly remove his camera. The video photographer was defended by two or three other HRW’s who linked with him physically and interposed themselves in front of the attacking soldiers. The remaining HRW’s made their way through the entry room into the living room where the Palestinian family was being held hostage. 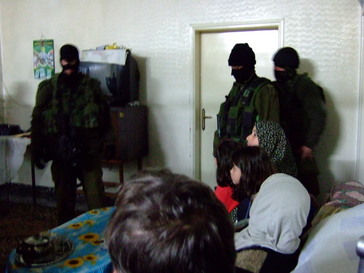 One IOF soldier continued the assault in the entry room, attempting to grab the camera through the huddle of HRW’s and then leveling his assault rifle menacingly and yelling threats while sweeping the muzzle of his rifle and laser sight across the faces and bodies of the HRW’s. The rifle was loaded with live ammunition and the soldier was exhibiting psychotic behavior. After a stand-off of several minutes, the HRW’s in the entry room were allowed into the main living room area where the other HRW’s had gathered with the hostage family which had been confined to chairs and contained women, children and elderly persons.

After a further stand-off of several more minutes and arrival of a further contingent of HRW’s, the four IOF soldiers departed. The family and group of 13-14 HRW’s were joined by the mayor of the community who spoke appreciatively of the efforts of the HRW’s and described the ongoing effects of the occupation. The second house was reported to be also secured, with the IOF leaving. HRW’s remained in both homes overnight as protection against further assaults by IOF soldiers. No damage by the IOF soldiers was reported in either home. Home invasions without warrants are illegal under international law and are flagrant acts of terrorism by the Israeli occupation.