The Huwara checkpoint controlling exit from Nablus is notorious for long lines and hours-long delays, particularly on holidays. This roofed and turnstiled checkpoint, in place since the start of the current Intifada, governs traffic flowing to Ramallah, as well as to the many nearby villages outside Nablus. University students, workers, and people seeking medical treatment or coming for shopping must cross Huwara, many on a daily basis.

On Saturday, November 10, a Human Rights Worker (HRW) leaving Nablus arrived at Huwara, around 2:40 pm, to lines which crammed and extended metres beyond the tin-roofed checkpoint area. On a good day, the lines would run a third to half the length of the area. The side passage, between the roofed area and the wire fence, is normally reserved for women and children to pass through for ID checking. 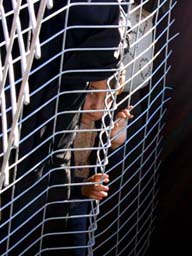 Thirty minutes after the HRW arrived, the lines of waiting Palestinians had not moved; instead, they had grown, extending yet numerous meters further. Palestinians reported they had been waiting since 12:00 to pass through the checkpoint. At approximately 3:10, the HRW called Machsom Watch to report the checkpoint problems. About 10 minutes later, Israeli Occupation Forces (IOF) soldiers began removing some additional wire fencing which had been strung across the outer passageway normally reserved for women and children. The fencing crossed from the outer wire fence to the iron rails of the checkpoint building itself.

After removing this fencing, this ‘flying checkpoint’ within a checkpoint, IOF soldiers finally began checking IDs of the waiting Palestinians. During the period between 12:00 and around 3:20, upwards of 300-350 civilian Palestinians were made to wait, some for 3 hours or more, their day disrupted by the arbitrarily-imposed blockage. The timing of the closure coincided with the return of many university students to their homes outside of Nablus, as well as the return home of those who had gone to Nablus for shopping and other needs.

Tagged with: Denial of Entry Nablus