Today at 8:30 in the morning, 16 ISM human rights workers joined over a hundred local Palestinian villagers and activists in an attempt to remove a roadblock. Normally a journey from Sarra to Nablus would take five minutes, but since five years ago a roadblock has been placed, effectively making it an Israeli only road for the military and settlers. This prevents villagers from using this road, extending the
journey to at least half an hour. There are also 500 dunums of villagers’ land that they are prevented from accessing due to the roadblock. Local villagers contacted members of ISM to join them in removing the roadblock. 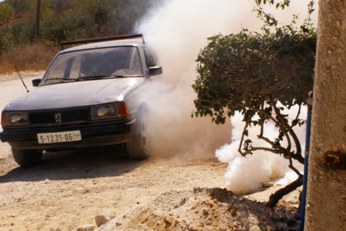 The people marched down to the roadblock in high spirits. Once there, villagers used tractors and ropes to remove the cement blocks from the road. The strategy was not only this, however. In the past the roadblock had been removed, but afterwards the army entered the village, shot out the tires of the tractors, and arrested the tractor driver. The village was looking for an action in which
everyone took part, and in which everyone could share the responsibility for fighting against oppression. The idea was that with
such a large group of people, committed people, showing with their presence and their action that they would not ignore what was being done to them, they would be better able to negotiate with the local DCO. 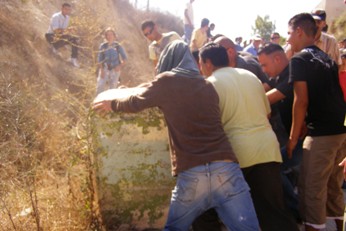 The DCO then came, two men in a white jeep. The people from the village, including the mayor, talked to them about this roadblock. The DCO of course said they could take no action then and there but they would talk amongst themselves and see if another solution could be found. Afterwards the activists met in a local man’s house and decided the day’s action was a success. They had achieved what the villagers
had wanted, removed cement blocks from their road and helped them with their negotiations, all without violence. This did not prove to be the end of the day’s events.

Afterwards media came, and it was decided to remove another cement block still in the road to widen the path for cars. This time soldiers showed up in two vehicles and began provoking the people gathered there. An army jeep revved his engine and drove forward almost inside a group of people. Still there was no violence from the Palestinians, and people seemed more concerned with removing the block in spite of the provocations. Then the soldiers began throwing sound bombs. At this, the affront could not be contained by some, and local children began throwing stones. More soldiers came and began shooting tear gas into crowds, firing live ammunition into the air. Some
internationals went back with the fleeing villagers, while some stayed to document what was happening, and to witness in the event that the army tried to invade the village. The soldiers laughed into the cameras of the press after shooting live ammunition into the air.

The army kept coming, followed soon by the border police. The international activists went back to a local man’s house to find out what should be done next. Some then followed a group of Palestinians who returned to the roadblock, in the face of the violent aggression from the soldiers, in order to try to de-escalate the situation in a non-violent way. People held their hands up in the air, in order to show that they did not intend to throw rocks, and tried to speak to the border police who had arrived. They then spoke together, the local mayor telling how the rock throwing only began after the provocation from the soldiers. Bravely, after hearing live bullets shot into the air, the
villagers themselves brought the situation to an end. The army said they would back down if the villagers did, and the villagers said they didn’t want the violence in the first place. 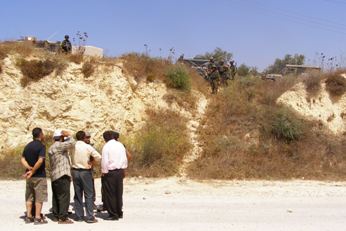 Again the internationals met together, this time in a local boy’s school. It was a different meeting from before, with different things to speak about, but once again, due to the dedication of the Palestinians present, the day’s events were thought to be successful.

The villagers are waiting for a decision from the DCO about the fate of the roadblock preventing them from accessing their land and roads. But they do not trust the israeli army to work for their benefit. They believe there is a good chance that this roadblock will soon be replaced, and the DCO will decide it will be there to stay. They have called on international volunteers to come in this case, Friday, August 24th, around 1:00pm after the Friday prayer to protest the continuing presence of the roadblock, and they are ready to make weekly
demonstrations in the village until the roadblock is removed.