New
Home / Reports / Pulling Up Illegal Settlement From the Root

Pulling Up Illegal Settlement From the Root 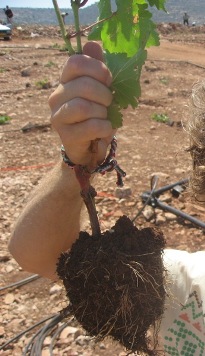 Approximately 60 Palestinian, Israeli and international activists joined together to protest and take non-violent direct action against the illegal confiscation of Palestinian land from the village of Al Mazra al Qiblya. Israel has declared the land state land, despite villagers’ claims to the contrary. Although Israel claims that the land was declared state land in the nineties, local Palestinians were never informed of this. Israeli law requires that a formal declaration be made, which would have given Palestinians the opportunity to contest the confiscation. Although Palestinians are contesting this in court and plan to challenge this decision legally, settlers have nonetheless begun planting grape seedlings there for cultivation. Cultivating land is often the first step in absorbing Palestinian land into a settlement. After the land has been worked on, settlers can claim more easily that it was previously Israeli owned and even if it was not, that Palestinians chose not to work it and that the land would have been left fallow had they not cultivated it. 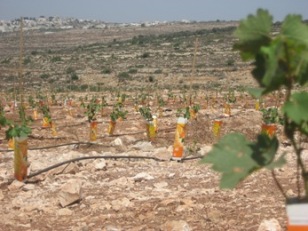 At approximately 11am, the demonstrators walked across a rocky hillside to gather on the confiscated land. Upon seeing the way the settlers illegally cultivated the land, planting young grape vines, they began to pull up the plants. Palestinian, Israeli and international activists pulled up hundreds of plants in order to demonstrate that this land is not for settlers to use and that arbitrary confiscation will not go unchallenged.

A grape seedling pulled up

After approximately twenty minutes, a small group of soldiers arrived. One of the soldiers approached some of the Palestinians to talk. Media gathered to witness the discussion. Witnesses say that the discussion related to the legitimacy of the land’s ownership and the destruction of the crops on the land. Although the discussion lasted maybe twenty minutes, there was no aggression and no one was arrested.

As the demonstrators began to leave, an armed settler suddenly appeared brandishing a camera and carrying what appeared to be an automatic rifle. The armed settler began shouting at the Palestinians in Hebrew and filming the people present. He threatened the community and shouted curse words in Arabic. A few Palestinians tried to engage him in discussion, however he was mostly ignored as demonstrators refused to allow him to disturb them. 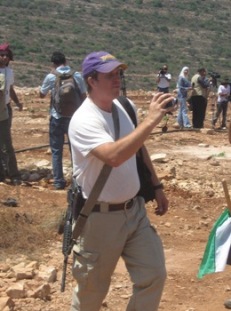 As activists left the land they chanted in protest against the occupation and the land theft and made their way back to their cars.