Tel Rumeida: Detention and Harassment for Children on Camp Trip

Saturday July 22nd, the Tel Rumeida Summer camp was to go on a field trip to the nearby villages of At-Tuwani and Qawawis. The theme of the summer camp is “solidarity and friendship,” and the purpose of this trip was to let the kids meet children from other villages and to learn about the similar problems they face both from the army and from the Israeli settlers. See this article for more info on that subject.

We took 100 kids in two buses to the village of At-Tuwani. The village is about a half kilometer walk from the road and our two buses were parked very much on the SIDE of the road, in no way obstructing traffic as you can see in the following photo: 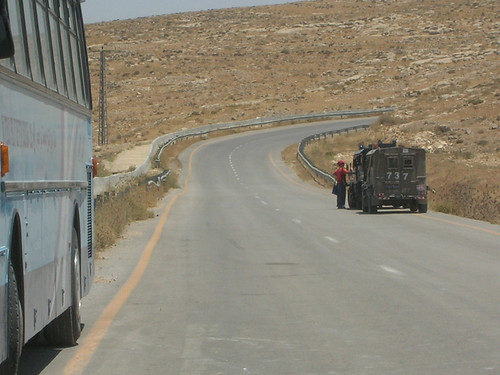 A short walk took us into the village where we learned that the children from this village need an army escort to go to school every day because of attacks from settlers. Christian Peacemaker Teams and
Operation Dove, two international organizations both work in this village to document cases of harassment from settlers but are not allowed to actually intervene.

There were about 20 bottles of water which we pretty much went through by the time we were ready to leave Tuwani and go to Qawawis, which was just down the road where the plan was to make and fly kites.

After returning to the busses, we saw that an army jeep had parked itself between them and when we spoke to our bus driver we learned that he was being detained by the army because of a problem with his driver’s license. I never really understood what the problem with this was, but the army commander said that he was going to call the police in order to “check” the buses. “Check” them for what I never
figured out. Issa spoke to the commander in the jeep and learned that apparently it is illegal to be parked on the side of the road, despite the fact that the buses were not blocking traffic, were behind the yellow line on the shoulder or the road, and there were no signs saying “No Parking.” The commander said both drivers would be fined 1000 shekels each. This is about $250 which is about half a month’s salary for many people here. 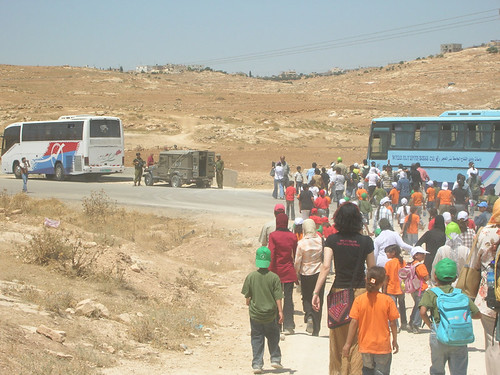 While all this “checking” and arguing was going on, I started to make some phone calls to Israeli and international human rights organizations because we could all see that this had the potential to turn into a disaster: 100 kids, 85 degree F weather (29 C), no water. 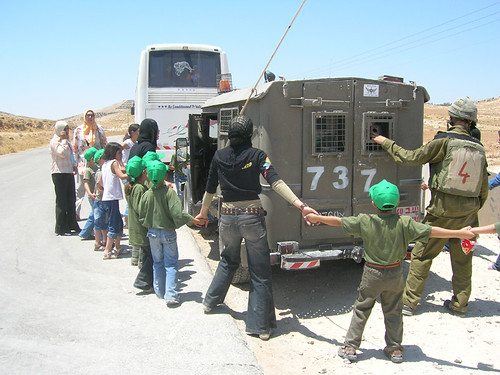 An hour passed. The police showed up. We asked the police, for the love of god, bring the kids some water or just let us go. They refused. The kids had a demonstration, they held hands, surrounded the police and army jeeps and chanted “Bidna rouweh, bidna rouweh !” which means “we want to go, we want to go !” Here is a video clip:

I have to hand it to these kids, they were so brave. No one cried, there were no tantrums, they mainly
stayed in the buses or played quietly on the side of the road and chatted to each other. Sometimes they would ask me what was going on or if I had any water which broke my heart. We were all noticing how
well they were dealing with the situation and someone remarked that as Palestinian kids, they probably don’t have very high expectation and that something like this, is, well “normal.”

But it is not “normal” to punish children like this and it is just plain harassment however you look at it. The army and the police could have let us go and just detained the one driver. We could have taken the kids down the road to get some water and finish the field trip. But no, everyone had to be detained. 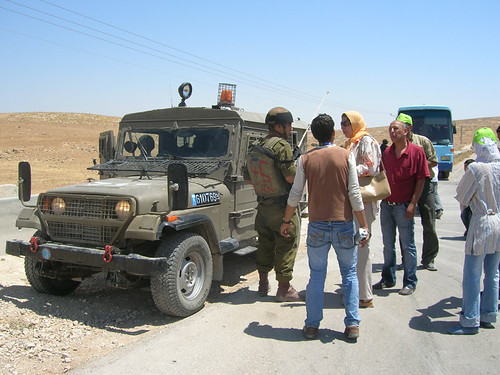 Many arguments with the police and the army ensued and we were on the phone with the Association for Civil Rights in Israel and Ta’ayush trying to get someone to help us to be released. Eventually Lina called the Red Cross to ask if they could bring us some water. The Red Cross was closed on Saturday (?!) but they promised to try to call someone else. After two hours of waiting I called the American Embassy in exasperation and explained that there were two American citizens detained in the middle of 85 degree weather with 100 Palestinian kids and some adult chaperons, no water and would they please intervene and help us all. Just as I was about to pass the phone to the police officer so the lady at the embassy could speak to him, we learned that we would be released. It had been two hours.

We drove about 10 minutes down the road to the village of Qawawis where the villagers let the kids drink from their well. Unfortunately it was too late to make kites and fly them but the kids had a good
time running around in the village, remarking in amazement that the people there are poorer than they are and live in caves with no electricity or running water.