New
Home / Nablus: What Could Happen Next?

Nablus: What Could Happen Next?

The Israeli siege on Zawata, a village near Nablus, continued around noon on Thursday, July 19, 2007 as Israeli Occupation Forces (IOF) demolished the exterior wall of a second home. The home itself was saved due to the extreme pressure placed on the IOF by international human rights activists present on the ground. The house belonged to Asad Natour’s three brothers. Faris Natour, 21, was interrogated inside his family’s half demolished home for almost six hours before he was arrested and taken away by the IOF.

“I had been sleeping. We turned on the television and we heard that they had entered the house of my brother and law. We were worried,” said Om Faris in a video interview with an international activist present at the demolition. “We went out on the street when there was an announcement that the army had pulled back. We wanted to walk up to check on our family members up in the village. And that’s when we realized that the army was standing just outside of our door. This was at 10:00 am.”

The IOF surrounded the house and they called the families out on the street. “They made them take off their clothes, all of their clothes one by one,” said Om Faris. The families were then strip-searched and forced to sit in the sun for two hours.

“They tried to call out Faris and when he did not response they called out for his mother—me,” said Om Faris. “They told him to surrender with ‘his bomb’ or they would blow up the house.”

The Israeli Committee Against House Demolitions’ website cites a 2004 B’tselem Summary as reporting that more than 628 Palestinian homes were demolished during the second Intifada. These demolitions were used as specific tactic of collective punishment which affected the families of people known or suspected to be “terrorists.” 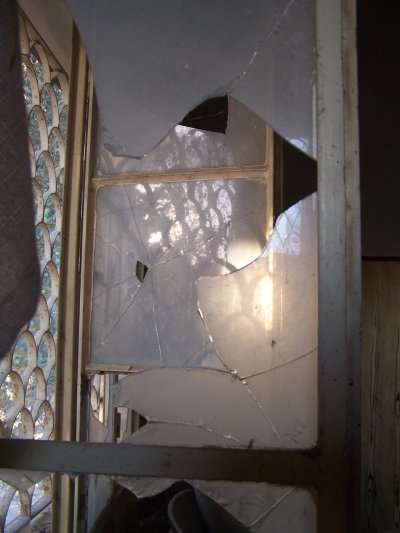 Om Faris continued lamenting the events that transpired at her home that day. “I told them 18 people live in this house. We are still paying off the debts of this house. I started crying hysterically. Faris calmed me down and said I should leave. He told me: a house can be demolished and a house can be rebuilt,” she said. “Then they took the women up on the street. I refused to go. I told them if they are going to demolish my house they are going to do it with me in it.

The house behind Om Faris’ home also fell prey to the IOF who had encircled the vicinity. Though the house was empty every window was shot in and shattered glass hemmed its interior.

Osama Zawati, 50, was returning home from work in Nablus at 2:00 pm when he realized his neighbor’s home was under siege. He held two grocery bags of fruits and vegetables and was told by an IOF soldier to walk swiftly with them by his side straight to his home or he would be shot. Later, he tried to look at the damage to the windows of his neighbor’s home, however, the IOF did not permit him to do so.

Around the same time, the IOF shot rubber bullets at an ambulance parked a quarter kilometer from the home still being occupied. The ambulance was parked outside a home where medics and internationals waited, after being denied access to the home, for Faris to be released and the army to leave the village.

At 5:00 pm, less than three hours later, the Israeli army occupied the house of Nowaf Abu Amsha, 35, in which the internationals and medics had been waiting, and the family was dragged out into the street. The army then demolished the family’s nearby garage with their car inside. “They didn’t ask me even to open it,” said Abu Amsha.

At 6:00pm the IOF left the village, two young men from Zawata still in their custody. Their mothers left to wonder when, if ever, they would see their sons again.

“On average 12 innocent people lose their home for every person ‘punished’ for a security offense – and in half of the cases the occupants had nothing whatsoever to do with the acts in question,” reads the ICHAD website. “To add to the Kafkaesque nature of this policy, the Israeli government insists it is pursued to ‘deter’ potential terrorists, although 79% of the suspected offenders were either dead or in detention at the time of the demolition.” (B’tselem Summary 2004:1,3).