Starting on monday July 9th, 2007, ISM volunteers joined skilled Palestinian workers and international volunteers from EAPPI (Ecumenical Accompaniment Programme in Palestine and Israel) and Holy Land Trust, in coordination with ICAHD (Israeli Committee Against House Demolitions) in rebuilding a house in Al Walaja vilage that had been demolished by the Israeli Occupation Forces. 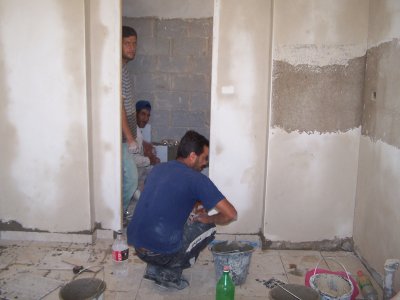 Al Walaja Village is now located 8 kilometers west of Bethlehem, and has 65 houses and one mosque slated for demolition, though the location of the village has changed over the years according to the whim of Israel. When the Israeli State formed in 1948 the village was moved from the Jerusalem hills (where it had been located for more than a hundred years) to a nearby location reduced from its original size by 90%. By 1967 half of the village had left, half remained. State harassment continued; in the 1970s, Israel limited building permits for Al Walaja villagers. In 1981 Israel issued orders to annex the village into the Jerusalem municipality, to become Israeli public land, but did not provide services or rights to the people living there that were normally accorded to Jerusalem residents; villagers received orange ID cards instead of blue as a tactic to drive them away.

This has taken its toll. Villagers now must be over 40 to obtain a work permit as a laborer in Israel, unemployment is high and many people leave to the UAE to find work. Those that stay are faced with a landscape increasingly surrounded by settlements, of which Har Gilo is the closest. The Israeli government has planned to build the apartheid wall entirely around Al Walaja, so that it is surrounded, with one entrance. A village of 2000 people surrounded by a wall and illegal settlements, with little chance to work, and houses slated for demolition. It is not a pretty picture.

When volunteers from ISM joined the building of the house of Monder and Seham Salem, what struck us was their brave face of resistance in front of all this repression, but what also struck us was their story. Their house, the house they built with their own money, was first demolished in January of 2006, they were told they didn’t have a permit. After having their house demolished without any warning they were forced to live in a tent in the winter for two months. They rebuilt their house after this with money pooled from the local villagers, and tried to get a permit, but after it was built it was demolished again in December 2006 because they were told the apartheid wall was due to cross their property. Again, they were not given any warning. 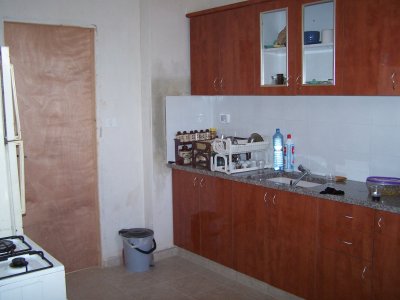 Their family had owned this property since before 1948. They were fined 100,000 NIS because of ‘illegal building’, which they refused to pay. Because of their inability to pay this fine, the father, Monder, was imprisoned for one month, also their oldest son was arrested and kept in prison but for a night but released due to his young age. To rebuild their house to half the size after the demolitions it has cost in total around $35,000. This time their house, the third to stand on the property, was paid with money from ICAHD and Holy Land Trust.

In a village of similar stories, we spoke to a nearby neighbor who has spent $76,000 dollars on court fees to Israel over 12 years for Israeli surveyors to measure his land, for Israeli workers to fly to Turkey to verify his land claims from the Ottoman empire. While we were there this neighbor happily showed various documents, some from the British mandate, showing that his family had owned this land.

Amazingly it took only two weeks for spirited volunteers and Palestinians to put foot to sand and hand to brick and put this house back together. Some days there were as many as 30 and 40 people from many different countries that only wanted to do their best to work with people that were committed to not doing the easy thing, not leaving to another country without illegal settlements and so much institutional racism, but to stay on the land that their grandfather owned, to stay and struggle for justice.

The people that live in Al Walaja will be completely isolated from other villages like Bethlehem and Bet Jalla by Bypass road 60 and the wall for the fault of Israeli policy of confiscating land and driving out the original inhabitants. One man has to keep his chickens in a van because he is not allowed to build even a chicken coop, the people are not allowed to build anything as a way to falsely prove that Israel is stealing a land without a people.

After working for a week side by side with the family, with Palestinian workers, with international volunteers, on Saturday, June 14th, there was a ceremony, a kind of ribbon cutting for the house. The family spoke of their gratitude for their new house. The volunteers spoke of their gratitude for meeting the family and the opportunity to do something. Two olive trees were planted on the property from Holy Land Trust and the local popular committee as a symbol of Palestinian commitment to their land. 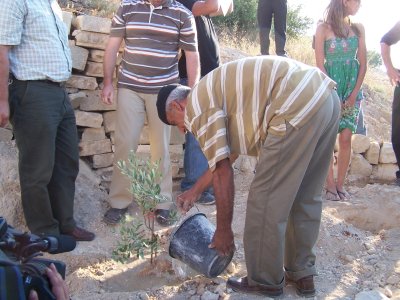 But their commitment was not only symbolic, the brother of Seham Salem, who had helped her rebuild her house every time, and worked tirelessly making sure the house was built right, said he also would commit himself to helping rebuild houses demolished by the Israelis as a volunteer. ICAHD also committed themselves to rebuilding houses demolished by the Israeli occupying army. More than 18,000 homes have been demolished since 1967, more than 18,000 families have been kicked out without warning. ICAHD said they had rebuilt 40 already this summer, with the goal of 300 rebuilt by the end of the year.

Clearly the work is not over. It is easy for people with foreign passports to work some days of manual labor and leave for foreign shores. It is the people who have had their house taken from them, destroyed, that must live with it. But we are not standing idly by. The work we did was important, but far more important was meeting the family, and families of the region, listening to their stories, and repeating them to all who will listen. These families prove there is no irresistible force that can stand up to an immovable object.