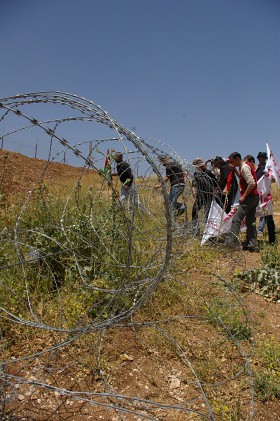 Demonstrators reach the wall in al-Numan

Residents of Al-Nu’man and Al-Khas villages today took part in a non-violent demonstration at the Israeli Apartheid Wall, which divides families and relatives between the two villages. The two villages were practically one before the building of this fence. In fact, the municipal offices were centered only in Al-Khas, as was the mosque and the school.

Al-Nu’man is a small village situated southeast of Jerusalem and northeast of Bethlehem, a few hundred meters north of Beit Sahour. In 1967, Israel illegally de facto annexed East Jerusalem and surrounding areas, including the land of al-Nu’man village. However, the inhabitants of the village were recorded as West Bank residents and given West Bank IDs, rather than the Jerusalem IDs received by most Palestinians in the illegally annexed areas. As West Bank ID holders, these residents are considered by Israel to be illegally residing in Jerusalem simply by being in their homes.

A petition submitted by residents of Al-Nu’man village, supported by the Al-Haq and Defence for Children International- Palestine Section humanitarian agencies will be heard by Jerusalem High Court of Justice at 9:00am on Sunday 13 May 2007.

Today’s demonstration comes as part of the “Stop the Bleeding of Bethlehem” campaign, which aims to mobilize residents of the Bethlehem area to non-violently resist all forms of the Israeli occupation, including the wall, military checkpoints and land confiscation.

At around 11am, some 80 protestors, including Israeli and foreign peace and solidarity activists, converged on either side of the fence, which has besieged both villages. Activists from Tayyush came from the Israeli side with posters against the occupation, calling for peace. On the other side, people from the Christian Peacemakers’ Team, the International Solidarity Movement and the Alternative Information Center, held posters and banners about the occupation in Bethlehem, and both groups started their march to the Wall.

The Israeli group attempted to arrive at the checkpoint, walking along the main street from the village of An Numan, but were met by Israeli troops. The soldiers were prepared in advance and blocked the street, just a few meters from the outskirts of the village. At that point, the demonstrators started to run down the hill and managed to arrive at the fence, despite the presence of the Israeli military.

At the same time, on the other side of the fence, activists armed only with Palestinian flags started their march to the fence through the village’s agricultural lands. Upon arrival at the razor wire barrier, just five meters in front of the fence, they trampled the barbed spikes, crossing the temporary barricade to arrive exactly in the shadow of the fence.

From the Israeli side, demonstrators were met by three military vehicles and two jeeps of border police, full of Israeli soldiers and policemen. The Israeli forces shot tear gas and sound grenades at the unarmed protesters in an attempt to disperse them. Two unarmed demonstrators were injured when tear gas canisters were shot into their legs. Each suffered minor cuts and light burns.

After a few minutes of confusion, the situation calmed down and on both sides, demonstrators started throwing colored ribbons and strings from one side to the other, while relatives from each village shook hands through the fence and spoke of their lives since their enforced separation.

The demonstrators started singing in Hebrew and Arabic, but soldiers and police officers drowned out their songs by screaming at the peaceful activists “to go far from the fence”, threatening to shoot those who did not comply. The demonstrators managed to remain in place for half an hour, while arguing with soldiers and policeman, but no further clashes were reported.

The Israeli soldiers then started pushing people away from the fence from the An Numan side, while a military Hummer and a jeep entered Al Khas village to meet those demonstrators who were withdrawing. The troops argued with the protesters for almost twenty minutes, trying to prevent them from taking pictures, before giving up and leaving the scene.

Behind them, the fence was covered with colored ribbons, alongside posters calling for peace and the end of the occupation. From both sides, dazed soldiers struggled to understand how to remove the ribbons from the fence and were left looking at each other in confusion.

The demonstration ended peacefully, and no arrests were reported.