Women’s Demonstration in Hebron, Hope from Association of Women’s Action
by Martinez, 2 April 2007

Yesterday, the Hebron Women’s Club organized a demonstration in the Old City of Hebron. The women met at the Israeli Machsom (checkpoint), which separates the Palestinian neighborhood of Tel Rumeida (H2) from the rest of Hebron (H1). 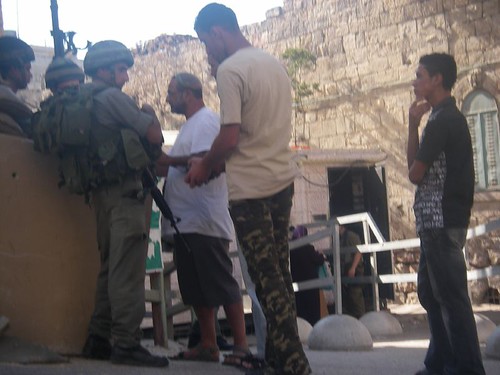 Palestinians living in H1 are subject to arbitrary home invasions and incursions by the Israeli military. H2, however, is under total Israeli military control. No Palestinians are allowed to drive cars of any kind in H1. If you are sick, you must be carried through the checkpoint where an ambulance may be waiting for you on the other side. The same holds true for pregnant women, who have to move from Tel Rumeida some time before giving birth to ensure that they are close to a medical facility.

Tel Rumeida is unlike any other place in the West Bank. Extremist settlers live side by side with the Palestinians, often in Palestinian homes whose residents fled because of the violence inflicted by Israeli soldiers and settlers. Many adult male settlers carry M-16 rifles as they walk the streets of Tel Rumeida with their families. Settler youth and, at times, settler adults, throw stones at and spit on Palestinian women, men, and children, while the Israeli soldiers stand idly by. 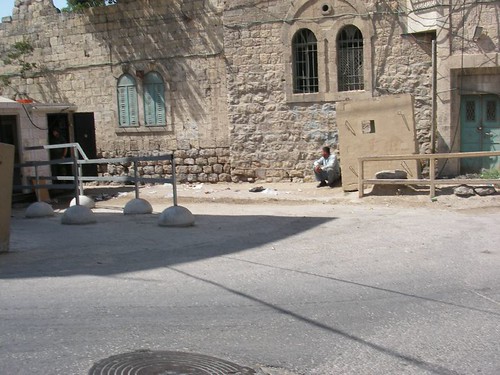 At this Machsom, the Women’s Club gathered. On the Tel Rumeida side of the barrier, Shuhadda is the name of the street that leads directly to the Ibrahimi Mosque. Palestinians used to frequent this once-bustling market avenue which borders the Old City—to shop and to reach the Mosque. Because of the Israeli settlements, however, which have been constructed illegally on Shuhadda, the Israeli army has shutdown the street to the Palestinians. The shops have been closed and the Palestinians must walk the long way through the Old City in order to reach the Mosque.

Though the Women’s Club was not marching down Shuhadda St. to reach the Ibrahimi Mosque, marching from the Machsom was a symbolic event, highlighting the violation of the Palestinian right of movement to reach their holy sites. 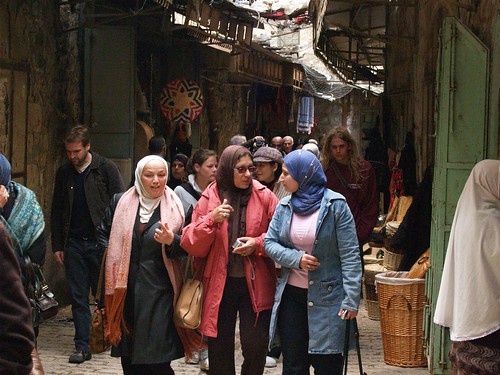 Palestinian women and internationals joined the march through the Old City to the Mosque. There was no incident from the Israeli soldiers during the procession.

There are three Israeli Machsoms that one has to cross before entering the Ibrahimi Mosque. They are equipped with Israeli soldiers, turnstiles, cameras, metal detectors, and sometimes have long lines because the soldiers detain Palestinians at will as they cross. 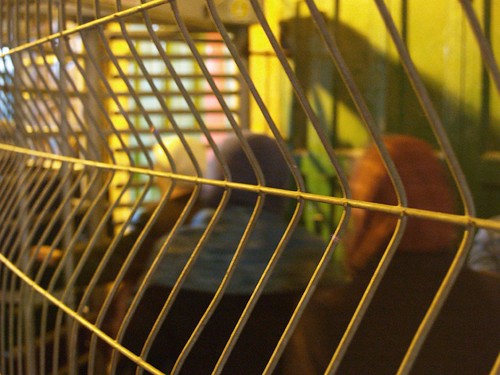 Today, as the women from the procession crossed through the first pf the three checkpoints, the soldiers detained three young Palestinian men, ages 16-20. The soldiers forced the Palestinian men to stand facing the wall, noses nearly touching the stone building. 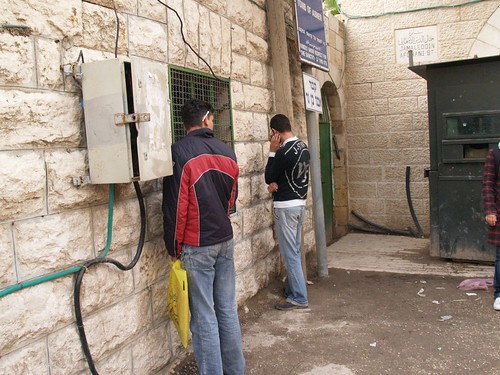 When international human rights workers (HRWs) asked why this was happening, one soldier replied, “Because they are terrorists.”

The women from the demonstration crossed the second of three checkpoints and entered into the Mosque to pray. The third checkpoint is in the Mosque. (The checkpoints were created by the Israeli government after Baruch Goldstein, an American-Israeli doctor, entered the Mosque in 1994 and opened fire, killing 29 Palestinians and wounded 150 others). 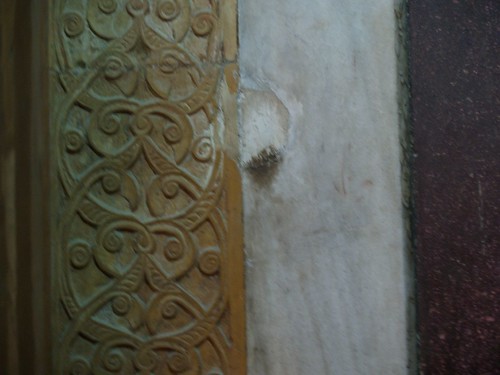 Eights HRWs remained with the Palestinian detainees. Additional soldiers arrived outside of the Ibrahimi Mosque and demanded that the HRWs leave from the area. The HRWs responded, “We will leave when our friends (the detainees) can leave.”

The Palestinian men were released a few minutes later.

When the Women’s Club exited the Mosque, they had to exit into the Old City through a separate checkpoint. The Israeli soldiers do not let the Palestinians or internationals exit through the checkpoint where they entered the Mosque.

The Women’s Club invited the demonstrators to visit the Association of Women’s Action for Training and Rehabilitation (AOWA). This group is assisted by TIPH (Temporary International Presence in Hebron). 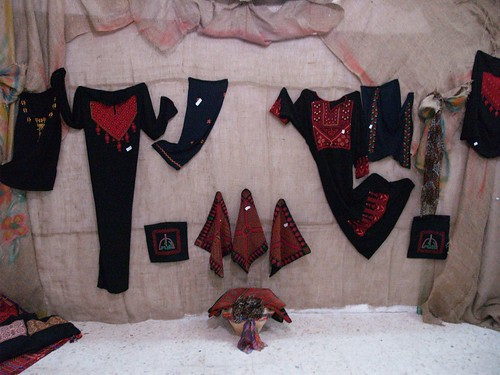 Sawsan Nasradeen, explained the goals and activities of the group. She said, “Women’s Action gives strength to Palestinian women, supporting them in their journey into the political world. We also teach women the art of embroidery and sewing. We can then help to sell their crafts to different groups in Israel and internationally… Everything you see here was made by hand. TIPH gives us the materials and we create these beautiful things… The women train other women these skills—everything from production to cooking—so we can help them earn an income.” 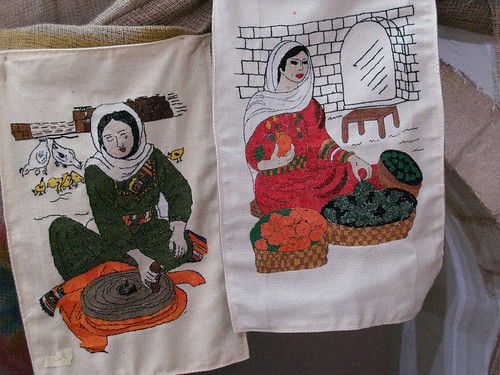 “There are women who have lost their husbands and sons to the Occupation. Some are dead or in jail. Women’s Action gives these women a place to work, we give them hope,” Sawsan explained.

Sawsan then explained that kids from the ages of 9-12 learn from the women at AOWA, “what their rights are, and what the Israeli soldiers can and cannot do to the Palestinians, and how to respond.” AOWA has opened 6 kindergartens as well. “We provide a safe place to children,” said Sawsan. 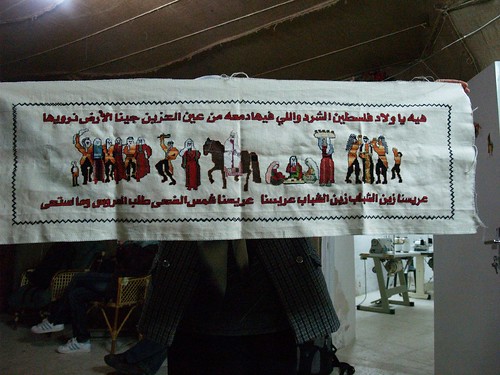 Major accomplishments for AOWA have been their exhibitions in Qatar and Spain, where the women’s handicrafts are displayed and sold and their profits returned to the women in Hebron. Their last exhibition kicked off on March 17, the date that is traditionally celebrated as “Women’s Day.”