Defense Minister Amir Peretz on Tuesday evening instructed Major-General Yosef Mishlav, coordinator of the government activities in the territories, to evacuate settlers who took over a house in the West Bank city of Hebron about three weeks ago.

Peretz issued the order following an evaluation by Attorney General Menachem Mazuz, according to which the house was illegally occupied.

“Although military and police forces expressed their opinion against evacuating the house in Hebron, we are not surprised by Mazuz’s decision,” the committee added.

The evacuation order is expected to be issued within 24 hours. The settlers have the right to appeal the order, but if their appeal is rejected, security forces will be authorized to remove the settlers from the house.

The defense minister already made up his mind to evacuate the settlers last week, regardless of whether they possessed the licenses and documents proving their ownership of the house.

The decision is based on a clause according to which the settlers must have the defense minister’s authorization to stay in the disputed house, which they do not have. 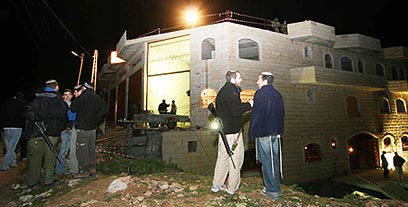 Hebron house on the night of the takeover (Photo: Gil Yohanan)

Peretz was harshly criticized over his decision to evacuate the house, but after receiving legal approval in a meeting with the attorney general on Tuesday evening, he decided to issue the order by Wednesday.

Defense establishment sources believe that an appeal will delay the evacuation. They added that even if the settlers lose the appeal, specific plans regarding an evacuation operation need to be drawn up, such that the implementation of the order will take time.

It is expected that the police, similarly to the recent evacuation of Homesh, will be undertaken by police, as the IDF is still in the midst of widespread military exercises.

The dispute over the house

Three weeks ago, some 300 yeshiva students and youths entered a Palestinian home near Hebron.

The settlers said that they had legal ownership papers for the house, which is located near the road linking Kiryat Arba and the Cave of the Patriarchs (Abraham’s burial site) in Hebron.

Meanwhile, Palestinian Fais Rajabi claimed he was the legal owner of the house. Rajabi said he had purchased the house some 15 years ago and planned to begin inhabiting it next week with his three wives and 22 children.

Rajabi said he bought the house from four brothers who had inherited it and that he has been renovating it since he made the purchase. The house is his life’s work, he said.