13 Nations Unite to Spray a Message of Freedom

13 Nations Unite to Spray a Message of Freedom
by Martinez 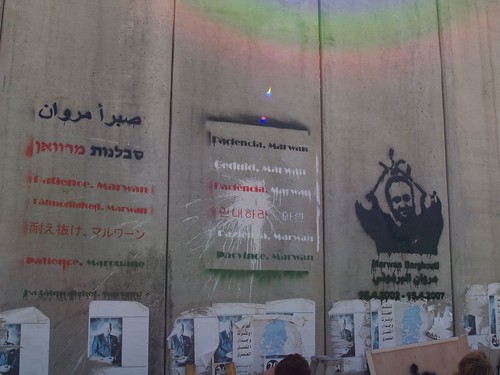 Members of the Campaign to Free Marwan Barghouti and All Prisoners were joined by Palestinians, Israelis, and internationals at Israel’s Apartheid Wall near Qalandya checkpoint today. A large stencil of Marwan Barghouti was pre-sliced as were thirteen additional stencils reading,”Patience Marwan,” all in different languages. The action was held in honor of Palestine’s upcoming Prisoner’s Day, to be held on Tuesday, April 17.

Nearly 40 people arrived for the action. First, prisoner solidarity activists climbed the ladders and spray painted the spliced wood, soon to reveal a silhouette of a familiar image: 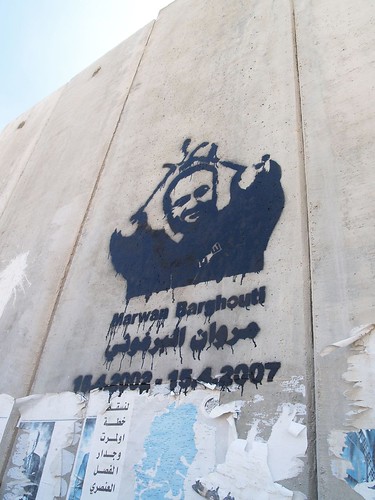 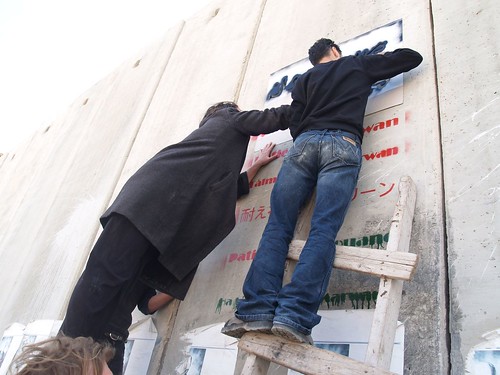 Then residents of South Korea, Portugal, Spain, France, Germany, Holland, the United States, Japan, Norway, and elsewhere, took their turns, spraying in solidarity a message of freedom– to release Marwan and all of Palestine’s Political Prisoners, currently being held behind bars in Israeli jails. 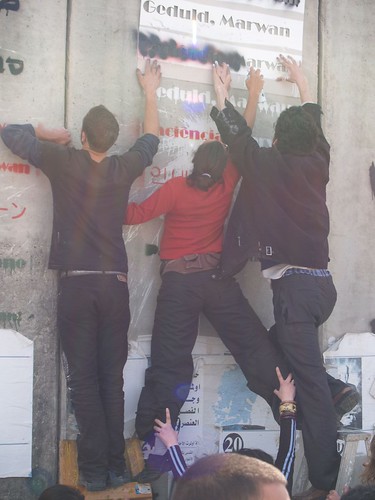 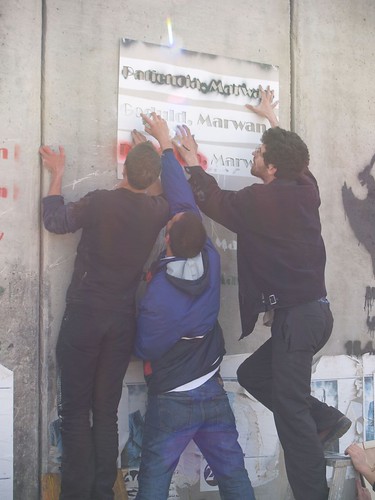 An Israeli soldier yelled at the spray painters from the Apartheid Tower, but the soldiers remained huddled inside the Wall, and the action continued.

In apprehending, detaining and torturing Marwan Barghouti, Israel has violated a number of provisions of international law, not to mention fundamental human rights. The following are the most significant breaches:

Arrest or Abduction
Marwan Barghouti was apprehended in Ramallah, in what is known as ‘Area A,’ which according to the Oslo Accords – signed by Israel and the Palestine Liberation Organization (PLO) in 1993 – falls under Palestinian legal jurisdiction; it is therefore a blatant breach of those Accords.

According to the Oslo Accords – Annex III (PROTOCOL CONCERNING LEGAL MATTERS), Article I:
(item 1) The criminal jurisdiction of the Palestinian Authority covers all offenses committed in the areas under its territorial jurisdiction.

(item 5) In the case of an offense committed in the Territory by a
non-Israeli against Israel or an Israeli, the Palestinian Authority shall take measures to investigate and prosecute the case, and shall report to Israel on the result of the investigation and any legal proceedings.
So, even if Israeli is accusing Marwan Barghouti of an offense committed while he is living in Ramallah, it has no legal jurisdiction over him. In view of this, some legal experts view Israel’s apprehension of Barghouti as an act of hostage-taking, or abduction, both illegal under international law.
Furthermore, Barghouti is an elected member of the Palestinian Legislative Council (parliament), and is therefore entitled to parliamentary immunity, which Israel infringed upon in this case.

Torture:
Barghouti was moved to the Israeli detention center, ‘Russian Compound’ (Moscobiya), in Jerusalem, where he was subjected at the hands of his interrogators (from the Israeli General Security Service – GSS) to physical and psychological abuse.

In particular, he has been subjected to sleep deprivation, position abuse (known in Arabic as ‘shabeh’ – for more on this, refer to the Israeli Public Committee Against Torture , and intimidating threats, all of which constitute methods of torture and ill-treatment, which are categorically prohibited by the Universal Declaration of Human Rights -Article 5 UNDHR the International Covenant on Civil and Political Rights (Article 7) and the Convention against Torture and Other Cruel, Inhuman or Degrading Treatment or Punishment. Israel is a signatory to these key human rights covenants, and is therefore legally bound by their prohibitions.

Although Israeli law now prohibits torture and the introduction into evidence of tainted confessions, and despite the fact that it provides that public servants who use or direct the use of force against persons for the purpose of extorting a confession of an offense or information relating to an offense are liable to imprisonment, Israeli GSS interrogators still frequently resort to various methods of torture, like those used against Marwan Barghouti, with considerable impunity.

Transfer to Territory of the Occupying State:
On Sunday May 26, 2002, the Israeli authorities transferred Marwan Barghouti to the Petah Tikva Detention Center in Israel proper. This is in clear contravention of the Fourth Geneva Convention, which precisely proscribes the transfer of people under occupation to the territory of the occupier. Article 49 of the Geneva Convention relative to the Protection of Civilian Persons in Time of War Article 49 states that:

Individual or mass forcible transfers, as well as deportations of protected persons from occupied territory to the territory of the Occupying Power or to that of any other country, occupied or not, are prohibited, regardless of their motive.

Detention Without Trial:
Despite profuse media reports that Israel has set up a team of twenty legal, intelligence and political experts to prepare an official list of charges against Barghouti, the defense team has yet to be officially notified of any such charges. Effectively, Barghouti has been held since April 15th, 2002, without trial and without charge. This is yet another violation of international law that Israel has committed in this troubling case.

According to the Universal Declaration of Human Rights – Article 10:

Everyone is entitled in full equality to a fair and public hearing by an independent and impartial tribunal, in the determination of his rights and obligations and of any criminal charge against him.

Everyone charged with a penal offence has the right to be presumed innocent until proved guilty according to law in a public trial at which he has had all the guarantees necessary for his defence.
*****************

In the run-up to Palestinian Prisoners Day on 17 April, Dr. Barghouthi also focused on the fate of the 10,400 Palestinians currently being held in Israeli jails in contravention of Article 76 of the Fourth Geneva Convention. [4] Of these:

– 4,430 (44 percent) have been sentenced by Israeli military tribunals
– 611 (14 percent) have been sentenced to 50 years or more in prison
– 4,575 (46 percent) have not undergone trial
– 950 (10 percent) are being held in administrative detention
– 7 (0.7 percent) have spent more than 25 years in prison; 3 have spent 29 years or more in prison
– 376 are children under the age of 18
– 5,000 children have been arrested since 2000
– 600 are women who have been arrested since 2000
– 118 women prisoners are currently in Israeli jails
– 40 are members of the Palestinian Legislative Council (PLC), including the Head of the PLC
– 95 percent of Palestinian prisoners have reported being subjected to various forms of torture
– 183 Palestinians have died in prison
– 69 died due to torture
– 42 died due to medical negligence
– 1,000 are suffering from chronic diseases
– 200 suffering from serious health conditions
– 72 Palestinians were assassinated following their arrest