House Demolition in Halhul and House Invasion in Hebron 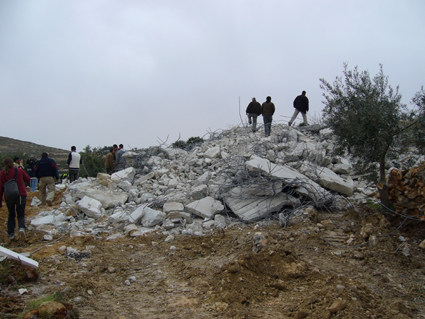 At 8am, Human Rights Workers (HRWs) received a call from Rabbis for Human Rights to say that the Israeli army had already begun a house demolition on the edge of Halhoul with a possibility that more houses would be destroyed. Three HRW’s set off for Halhoul immediately. When they arrived, they discovered that the demolition had begun at 7 am and there was not much left of the house. A large crowd of Palestinians had gathered and Israeli Border Police were keeping everyone well back from the 2 Caterpillar diggers (back hoes). 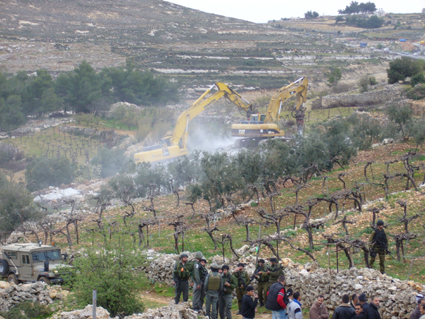 The house was still under construction and was owned by Ahmed Ibrahim Assouni Abu Yousef. He did have the correct permits from the municipality of Halhoul but the army said it was too close to the main road to Bethlehem. In fact it was more than 400 metres from the road.

The owner asked the Shabbab ( Palestinian youths) not to throw stones and for everyone to move back from the army. Human Rights Workers positioned themselves in the next house which has been threatened with demolition and filmed from there. This house is owned by Sayeed Abu Yousef. The army ordered him to stop construction a month ago. There are at least two other houses under construction which have received warnings from the army.

Palestinian youth set up a road block to slow the army from leaving. The army made no attempt to demolish any other houses this day but attempted to leave. They were showered with stones and returned fire with live ammunition, rubber bullets and a machine gun. One of the journalist’s cars got stuck on the road preventing the diggers from leaving. They had great difficulty in moving it.

Two Palestinians were injured and taken away in ambulances. One was hit twice with rubber bullets, once in the forehead, which was bleeding profusely and also in the leg. The other collapsed from shock.

Rabbis for Human Rights have lawyers working to appeal these demolition orders but in this first case it was too late. 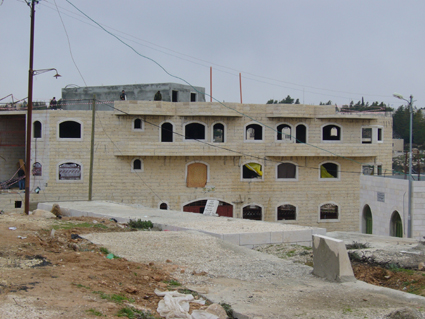 On their way back from the home demolition in Halhul, the Human Rights Workers arrived at the house that 200 Israeli settlers invaded the previous night, settlers whom were backed up by the Israeli army. The Palestinian home is located near the Jewish settlement of Kiryat Arba.

The settlers claim they legally purchased the house but Palestinian owner Bayez Rajabe denies this.

HRW’s arrived around 11 am. There were many journalists and film crews present. Bayez Rajabe gave an interview and held up the documents which prove he is the legal owner.

A Palestinian HRW interviewed him extensively. Local Palestinian residents are very angry that the army has sealed the road in front of the occupied house so that children cannot easily get to school and worshippers cannot reach the next door mosque and cemetary. Soldiers and settlers were observed in the Muslim cemetery walking, eating and drinking disrespectfully on the graves. An elderly lady, family of the owner, yelled at the settlers to leave the cemetery and they did.