South Bethlehem village marked out for the Wall 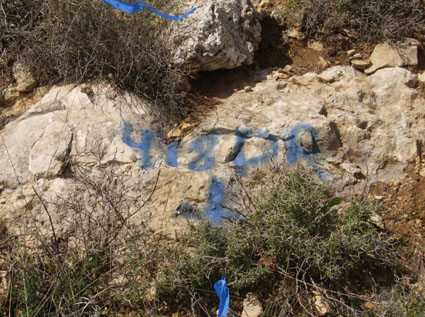 The Palestinian locals asked them why they were there, because the initial plan for building the Apartheid Wall was supposed to be on top of the hill. They claimed a court order had been given to build the Wall down the hill in the vineyards and surveyors needed to measure the land. The two armed security guards who came along with the surveyors were Arabic speaking Israelis who got this job recently.

The surveyors protected by soldiers and security guards marked the rocks and land with blue spray paint and blue tape. The HRWs documented their illegal activity. Soldiers pretended not to be able to understand English when questioned. The DCO* arrived but was not able to give any convincing explanation for this action, except that it was a court order. No official document was presented. All of them eventually left the site around 12:00 pm.

It later transpired that the Israeli Supreme Court had decided to reject the village’s appeal for work on the Wall to be stopped pending a court hearing on the route of the Wall through Umm Salamuna and other South Bethlehem villages. Villagers expect demolition work to commence soon.

In Tel Rumeida at around 4:00 pm, a group of colonists consisting of 5 women, 1 man, and about 10 children trespassed in Issa Amro’s garden on Tel Rumeida Hill. They had kept coming to his garden on and off since the morning, but stayed in the garden for about half an hour in the afternoon. Soldiers said the colonists had permission to stay there. Around 4:30 pm, as the colonists saw police on the way, they left.

At around the same time groups of women and children were walking to the Jewish cemetery on Tel Rumeida street and back. At 5.20 pm two women from the Abu Aisha family were pushed and grabbed by colonists who were part of a larger group as they walked home past the Tel Rumeida settlement. Soldiers quickly intervened and the women were able to get into their house. A crowd of colonists gathered and were shouting abuse at the Abu Aishas. Police arrived five minutes later and eventually cleared all the colonists off the street. It would seem that no arrests were made.