Rampaging settlers given immunity by Hebron Police on Sabbath

At 11 am as Palestinian schoolchildren were leaving Qorduba School in Tel Rumeida, two Jewish settler teenage girls began to throw eggs at them from the roof beside the synagogue of the Beit Hadassah settlement. The children ran away and no one was hit. Human Rights Workers (HRWs) began to film them and take photographs. Settler adults shouted abuse at the HRWs telling them to stop filming on the Sabbath. The settlers continued to harass the HRWs until they moved back, even though the settler teenagers were still on the roof. Six soldiers were there but they refused to protect anyone or to stop the teenagers from throwing eggs. They also refused to call the police.

At around 2pm one of the Abu Haikal family noticed that there were several Jewish settlers in their almond orchard. She stopped a police jeep and asked them to clear the settlers from the land. An HRW began to film and to take still photographs. The settlers were going up and down the stairs to the military observation post. They were also entering the observation post. The HRW asked one of the soldiers on duty by the Crossing (the military post at the junction below the flat where internationals live) to stop the trespassing. He called two other soldiers who went up the stairs. The police drove round to the top of the hill and entered the Abu Haikal land from there. Together the police and soldiers cleared all of the settlers from the Palestinian land.

The older woman was visibly frightened, and as soon as she reached the doorway of the nearest household on Shuhada street, she quickly ran inside. The settler girl then attempted to follow the woman into the building, and the tourist called to the soldiers in the area—asking them to help ensure the safety of the Palestinian woman inside the doorway. The tourist then stood in the doorway of the household, between the older Palestinian woman and the settler girl outside.

On hearing the tourist’s cry for help, a crowd of young settler boys (approx. between the ages of 12-14) from the Beit Hadassah settlement came running to the doorway. Soldiers followed, but kept their distance. The teenage settler girl and several young settler boys then proceeded to kick and punch the tourist, injuring him in the groin and legs. The tourist continued to appeal to the nearby soldiers for help, but the soldiers did not respond.

An Israeli police vehicle ultimately arrived, and the police officers dispersed the crowd. The police admonished the soldiers for not ‘being smart’ and ‘defusing the situation’. The officers then accompanied the tourist toward the Beit Hadassah settlement so that he could identify the teenagers that had attacked him. The tourist identified the female teenaged settler who had chased the older Tel Rumeida resident indoors, as well as a male teenaged settler who had initiated the attack on the him. Citing the Jewish Sabbath holiday, police said they were unable to arrest, detain, or question either of the settlers. The teenage settler girl, after being identified, was simply asked by police whether she wanted to file a formal complaint against the older Tel Rumeida resident. The settler girl refused to give police any personal information, and refrained from submitting a complaint despite telling everyone she had been assaulted. She claimed she could not give a statement on the Sabbath.

The male tourist then went with police to the Kiryat Arba police station to file a physical assault complaint against the settler teenagers. In the interim, both teenage settlers were let go by the police, and they returned to Shuhada St.

Later on, during the evening, the same house on Shuhada St was attacked at night by a mob of 30 settlers who ripped the front door off its hinges and stole it. The family called for help and local resident Issa Amro was detained by soldiers while attempting to photograph the incident. Soldiers alleged falsely that they had seen him on a roof taking photos of a military installation. Issa was released after 90 minutes in detention.

The local Palestinian woman who had been assaulted by the teenaged settler was also detained for two hours in the evening, and so was unable to care for her children.

The settler mob then proceeded up the hill. They threw stones at Palestinians in the shop by the Crossing and at the apartment building where Internationals live. One of the HRWs was assaulted a second time, this time by pushing and with stones. He retreated into the building and all the HRWs were pelted with stones.

The broken front door was returned to the family on Sunday, and they are currently trying to repair it and reattach it. 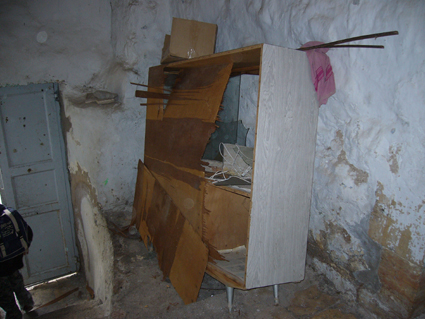 damage caused by settlers inside the house 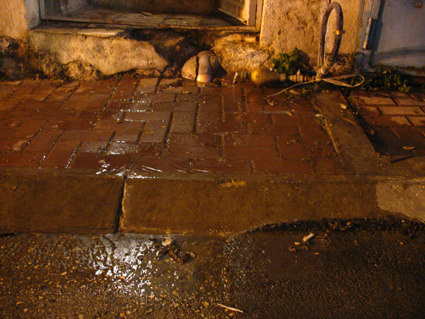 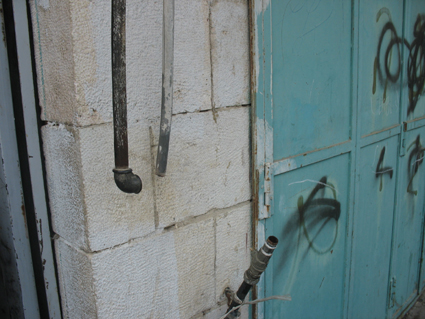 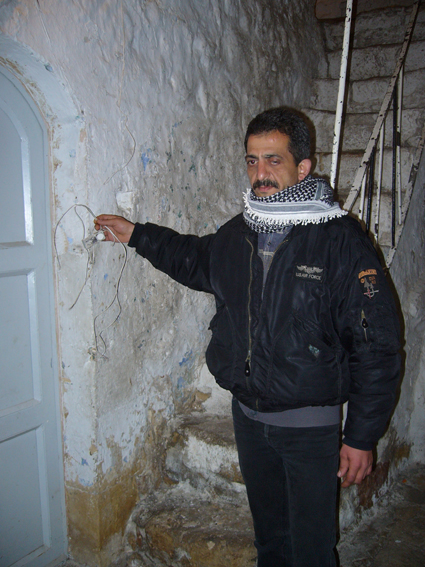