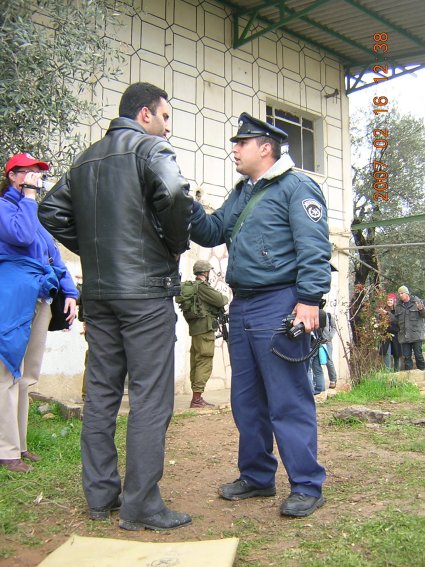 Around 10 am a group of human rights workers (HRWs) heard that colonists had entered a Palestinian house overlooking the olive grove on Tel Rumeida Hill. For the past two days colonists had occupied the house briefly, but were sent away by the police.

The house is rented to local Issa Amro, who received the rental contract from owner Ilham Siyej two days ago in order to make a living in the area surrounded by olive trees. Ilham, her husband and their seven children were forced out three years ago by colonist violence. Until recently the house was used as an IOF post. Yesterday the Hebron police were informed that Issa was going to move in and said there was no problem, so it is very suspicious that the colonists had preempted Issa.

When the HRWs arrived the settlers had left already, but it didn’t take long before IOF soldiers came by.

The HRWs then went to wait in a neighbouring Palestinian house. When the owner of the “closed military zone” arrived the HRWs walked up to the house again and started to remove razor wire and camouflage nets, because in recent months the house had been used as a military post. 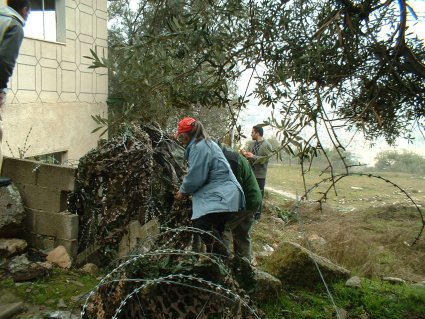 Again IOF soldiers came by and demanded that everybody leave and stop removing the razor wire. The group, now also supported by Israeli activists, moved a few metres from the house to wait for the arrival of the police. When the police came they showed the owner and HRWs a piece of paper written in Hebrew, saying it was the official document declaring the house a closed military zone. Issa Amro demanded that the document be translated into Arabic, but this was ignored by the police and military. Occupation authorities said that Issa had to get a permit from the DCO.* After translation it transpired that the order is valid for 24 hours, until 12 noon tomorrow. 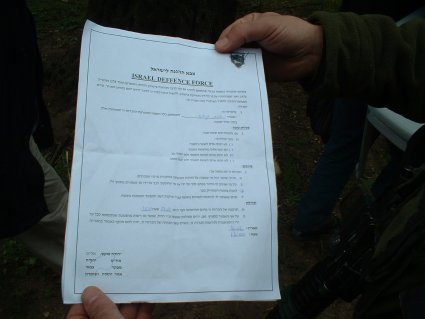 To avoid a confrontation and possible arrest, the owner decided to leave the house and its surroundings. The HRWs left the hilltop escorted by a group of five soldiers.

Tel Rumeida contains hundreds of empty houses and shops, whose residents have been forced out by colonist violence and military orders. Issa aims to reverse this trend: “all these houses in Tel Rumeida are lying empty whilst there is an acute housing shortage in the rest of the city. The Israeli authorities can’t continue to deny residents of Hebron their basic rights to live in their homes. We will not submit to the ethnic cleansing policies of the Israeli authorities in our city. I will exercise my right to live in a house I have rented in my city.”

Three years ago colonists started building a road that would cut through the olive grove where the house is located in order to link the Tel Rumeida colony at the top of the hill and Shuhada Street in the Old City. A Stop Work Order was issued temporarily halting construction of the road.

Later in the afternoon HRWs went down to monitor checkpoint 56 in the Tel Rumeida neighbourhood. Around 3 pm they heard a rubber bullet being fired followed by teargas on the other side of the checkpoint. HRWs went through the container checkpoint dividing H1 and H2 and into the Bab al Zawiya market area.

As teargas wafted though the air, locals said that a young Palestinian man had been shot with a rubber bullet. He had been taken away to hospital in a private car. Witnesses stated he was about 15-years old and was shot in the leg by invading IOF soldiers.

More soldiers started to enter the Bab al-Zawiya area, around 4 pm about thirty of them patrolled the neighbourhood and occupied two rooftops. After an hour they returned to their jeeps behind the checkpoint in Tel Rumeida.