Hebron peace activist Issa Amro attempted to walk down Shuhada Street in the centre of Hebron today, armed only with the Israeli High Court order confirming the right of Palestinians to use the street.When Issa reached the IOF military post outside the Beit Hadassah colony he was stopped by soldiers who denied him passage. On showing them the order soldiers informed him that there was a ‘new’ military order in force but refused to present this to him. The commander told Issa he would have to get his lawyer to go to court to view this ‘new’ military order.

Palestinians and peace activists outside the Beit Hadassah colony

Last week when Palestinians attempted to walk down Shuhada Street acccompanied by an Israeli TV crew, they were also told about the existence of a ‘new’ order. An IOF spokesperson later on TV denied the existence of this order and promised to investigate but so far no explanation has been offered. In ‘the only democracy in the Middle East’ High Court orders can be ignored at will by the IOF.

In another show of where the real power in Hebron lies, Israeli Peace Now activists were today banned from holding a rally in Hebron against settler violence, and were confined to the outskirts of the city.

Today, at around noon Amira Dotan, a member of the Knesset, came to visit Tel Rumeida. After walking up Tel Rumeida st. she spent some time speaking to Abu Samir about the situation his family faces dealing with the settlers that live across the street from his home. During the discussion Abu Samir conveyed the miserable situation he and his family live in thanks to the settlers’ continued violent aggression against them. After speaking to Abu Samir, Amira Dotan spent some time speaking to other locals, including peace activists, about the situation in Tel Rumeida. Once she reached Shuhada st. the Palestinians speaking with her had to leave as they are still not allowed to walk down this street past the settlement, as reported above. A few international human rights workers were allowed to follow her down Shuhada st., which was a first for them, while she spoke to settlers. 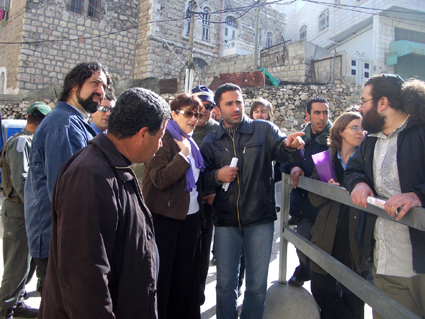 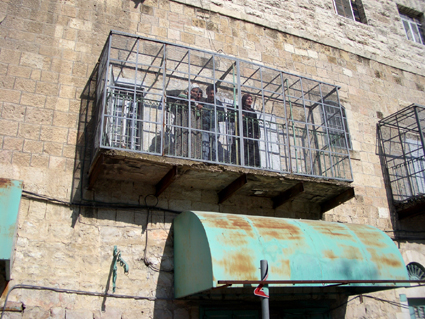 a cage for Palestinians in Tel Rumeida

This report was updated at 11pm.