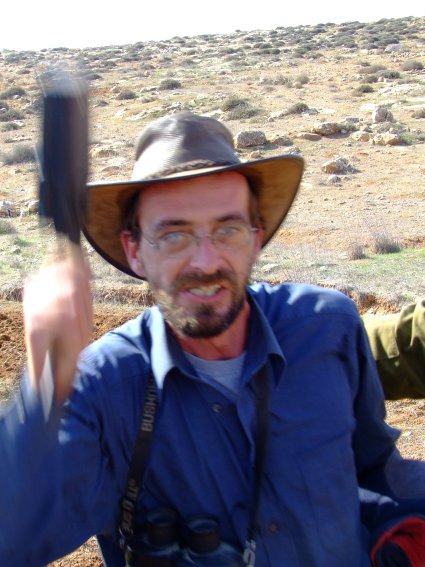 On Saturday 18th November a group of Israeli and international human rights workers met up with Palestinian farmers to plow fields in the shadow of an illegal Israeli outpost near the village of Tuwani. The joint Israeli-international accompaniment hoped to discourage Israeli settler attacks, by splitting into four groups and plowing simultaneously so that the effort of the farmers would be too much for the Jewish settlers to sabotage.

Armed with a recent court decision guaranteeing the villagers the right to work their land and the duty of the Israeli military to protect them from settler attacks, the Tuwani farmers feverishly plowed in an attempt to complete as much work as possible before the anticipated arrival of Jewish settlers.

Around two hours into the plowing action, a man appeared high up at the illegal Israeli outpost (Israeli settlements are illegal under international law, many outposts are illegal under International and Israeli law). He descended into the valley, taking pictures all the while, as a few human rights workers went to head him off and ask him the reasons for his presence. The settler remained mute, (even though as a South African, his English was more than adequate) and proceeded to wander around taking pictures of both Palestinian farmers and international volunteers whilst the plowing continued.

A short time later a settler driving a 4×4 vehicle came hurtling through the fields. The male occupant also started taking pictures of the farmers and then began attempting to obstruct the tractor’s progress by careening haphazardly around the fields in his vehicle.

Another Jewish settler then came running through the fields accompanied by three dogs. He singled out a tractor and began weaving about in front of it in an attempt to impede its progress, before jumping onto the front of it causing the driver to stop. He then proceeded to jump off and run around to the side of the tractor and fling himself to the ground feigning injury.

Observers, including the eight soldiers, looked on in bewilderment at this farcical performance as the poor confused driver pleaded his innocence. As human rights workers arrived at the tractor, the “injured” settler sprang to his feet and attempted to punch the Palestinian tractor driver, but the human rights workers held him back. He then began blundering around aimlessly in anger before attacking me with his walkie-talkie. After being restrained by a couple of soldiers he again began his angry blundering, before flopping to the ground after an apparent relapse of his tractor injury.

The police were then called to investigate the alleged assault, shortly followed by two zealous settler paramedics who began hurling abuse at all and sundry rather than examining the alleged injury. A Jewish settler then said to me “They’re suffering in Egypt, they’re suffering in Lebanon, they’re suffering in Iraq, why do you come here?”, “So you admit these people are suffering then?” I asked. He then turned and walked away. The “injured” man was then helped onto a stretcher and carried off up the hill, as police, soldiers and human rights workers discussed the incident.

Although the soldiers acknowledged the comedy aspects of the incident and the police implied the Palestinian farmer probably wouldn’t be charged, he was still required to attend the police station the following day to provide a written statement. An Arabic speaking Israeli promised to accompany the driver to the police station in an attempt to corroborate the accuracy of his statement.

With around two-thirds of the plowing complete the day can be said to have been a partial success, however, whether the crops are left to grow and be harvested unmolested by settlers is another question entirely. 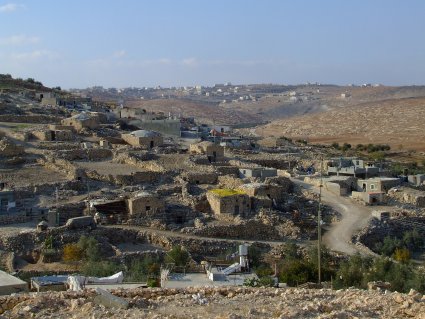