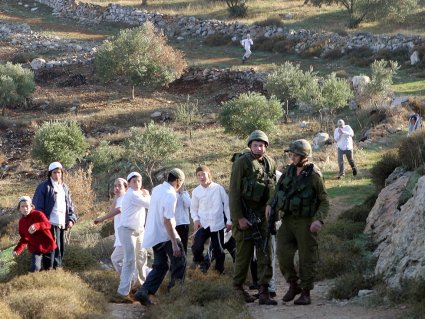 Today, Palestinian farmers from Azmut village north of Nablus city were attacked on their land by a gang of Israeli settlers, who were accompanied by two soldiers. The settlers ran after the families, shouted and threw stones at them. At one point they kicked and hit international volunteers, who had come to help the farmers pick olives. The group of settlers, aged from around eight to twenty, came from the settlement of Elon Moreh two kilometres away from the village.

This year’s olive harvest has been difficult for the people of Azmut. This is the third time this week that farmers from the village were forced off their land. Five days ago an armed settler stopped nearby and used a megaphone to threaten families picking olives, intimidating them into leaving. Yesterday, a group of settlers chased the farmers off their land. The farmers, knowing the violence that has come from these settlers in the past and the extreme views of those in the Elon Moreh settlement, didn’t want to risk any injuries and subsequently left.

This morning the farmers had to begin their work by picking up all the olives that settlers had thrown across the ground the previous night. They had only harvested for about forty minutes, when two soldiers approached and told them that “there is no coordination today, come back tomorrow”. 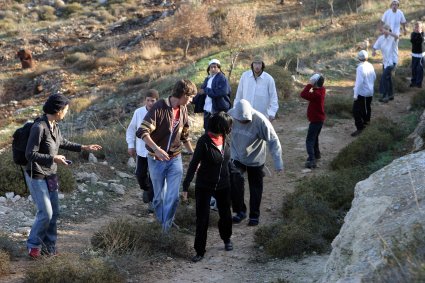 The international volunteers attempted to negotiate with the soldiers about the families’ legal right to access their land at any time, but after a couple of minutes a gang of around 25 settler children and young people suddenly descended down the hill towards the groves. The families had no time to collect their tools and olive sacks as they were forced to flee.

As the settlers approached the families and international volunteers, they stopped by the soldiers to pick up and throw stones. As they got closer one volunteer was kicked by a settler. Other volunteers were hit with rocks, one volunteer seemingly because he was recording the attack with a video camera. All of this happened with soldiers standing by and making no attempt to stop the settlers or to protect the families and the international volunteers, in spite of their legal obligations under Israeli law to stop settler attacks.

Elon Moreh is one of the oldest settlements in the northern West Bank and has explicitly expressed its purpose: to block the creation of a Palestinian state. The 1200 or so inhabitants are infamous for their religious and violent extremism. They have been involved in a number of serious attacks on Palestinian villages, where they have burnt down trees, attacked Palestinians and in some cases killed them.

This settler attack is just another example of the harassment that Palestinians face. Checkpoints, settler-only roads and military harassment all serve to keep them away from their land and livelihoods. The villagers of Azmut are afraid. But they are also determined to go back to their land, even in the face of such violence, to continue their harvest and to keep their land.

For more information on Elon Moreh, see this entry on the Peace Now website.