Several non-violent protesters were severely beaten by Israeli military and border police troops today, as a demonstration was staged at the tunnel checkpoint on route 60, a main Israeli controled road on the route to the south of the West Bank from Jerusalem.

At three in the afternoon Palestinian, Israeli and international protesters bearing Palestinian flags and anti-occupation banners marched from Al Khader village near the West Bank town of Bethlehem, to the busy checkpoint on the main south-bound road out of Jerusalem. They brought with them several gallons of olive oil, around thirty kilos of olives and, in a gesture of peace, two large olive tree branches. The olives and olive oil were dumped in the path of traffic, causing confusion on the road and a good deal of disruption for over an hour.

This symbolic action was intended to draw attention to the severe difficulties faced by Palestinian farmers, increasing numbers of whom cannot access their land. These negative effects of the occupation are felt with particular force in this time of olive harvest. The illegal wall that Israel is building inside the West Bank succeeds in effectively annexing large areas of Palestinian olive groves, preventing the harvest of the olives which is the life-blood of many Palestinian families.

It was not long before the peaceful protest turned ugly as the Israeli security forces attempted to control the situation with excessive force. Witnessed by dozens of international tourists passing through the checkpoint, as well as countless motorists, five of the policemen targeted a Palestinian demonstrator, dragging him from the crowd and issuing a beating as they forced his face into the tarmac. 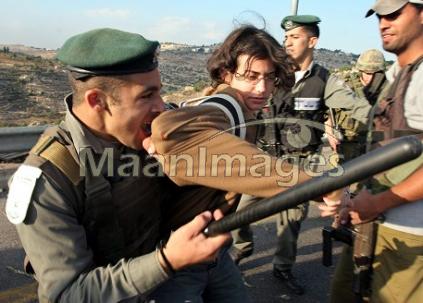 Further arrests followed as the policemen singled out other Palestinian protesters and dragged them violently into waiting jeeps. Soldiers and policemen alike were seen to lose their composure, shouting furiously at the demonstrators, shoving them to the ground. During an attempted arrest, a Palestinian man was dropped head first onto the concrete, knocking him unconscious. Despite some objections from the police, a Palestinian ambulance was called and quickly arrived at the scene.

Over the course of an hour five arrests were made including two Israeli activists. Throughout the commotion the remaining protesters maintained their non-violent resistance by waving their banners at the now slow-moving traffic and valiantly trying to deliver their message as the olives lay scattered across the road.

Eventually, in the face of unnecessary physical and verbal abuse, the demonstration was dispersed and the military took up brooms to deal with the after effects of an olive based offensive. 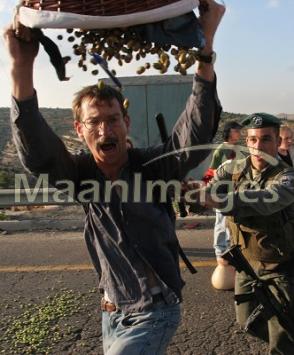 For another account of this protest and more photos visit:
http://palestinesolidarityproject.wordpress.com/2006/11/05/98/