Gazan doctors pull shrapnel marked “Made in USA” out of Palestinian 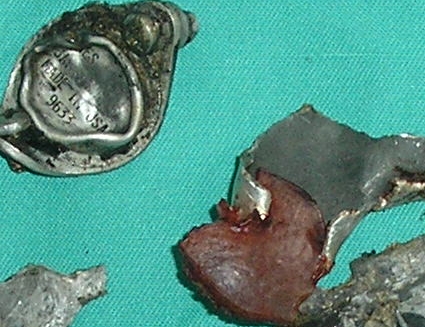 Gazan doctor Mona Elfaraa reports from Al Awda hospital, Jabalya on clearly marked American-made shrapnel found in a Palestinian now in critical condition during the current Israeli attacks on northern Gaza. According to Israeli newspapers, the so-called “Operation Autumn Clouds” has left 57 Palestinians dead so far. From a November 6th interview with the ISM media team:

“I have seen some of the shrapnel that was recovered from the previous day’s injuries, marked clearly with ‘Made in USA’. The shrapnel pieces seem unusual; our surgeons have not come across this before. Unfortunately, we do not have the time and facilities to investigate. Some of the bodies are totally burnt and have missing limbs and one them was covered with hundreds of pieces of small shrapnel.

“No-one is safe. This morning five and six-year old children wounded in a missile attack, were brought to our hospital. They were shaking and crying with fear. Their teacher Najwa Kholeef had been wounded in the head. A sixteen-year old boy and twenty-year old man had been killed.

“Tanks and armored vehicles have been surrounding the Beit Hanoun hospital for the last six days and preventing medical volunteers and victims of Israeli violence from reaching it.

“On Sunday our colleagues, 21 year old ambulance driver Ahmad Madhun and medical volunteer Mustafa Habib were murdered and Dannielle Abu Samra was wounded while trying to tend to the wounded.”