Last Friday and Saturday actions were held worldwide against the recent atrocities committed by the IOF in Gaza and the illegal Apartheid Wall.

Last Friday in San Francisco a vigil called by Break the Siege and Women in Black took place in front of the Israeli consulate.

In Montreal on Saturday, protestors marched through the streets carrying a symbolic coffin with the writing ‘United Nations’ to represent the international community’s failure to condemn the Gaza atrocities. A vigil was held after the march.

In New York on Saturday a day of action against the Apartheid Wall was held by the Ad-Hoc Coalition for Justice in the Middle East and DRUM (Desis Rising Up & Moving). The day kicked off with a workshop highlighting the parallels between the wall on the US-Mexico border and the Apartheid Wall in Palestine. This was followed by a march through Manhattan carrying a long black cloth “wall” ( for photo see above).

In Cardiff, Wales, three soldarity activists locked themselves inside the medieval castle to protest the occupation of Palestinian land. 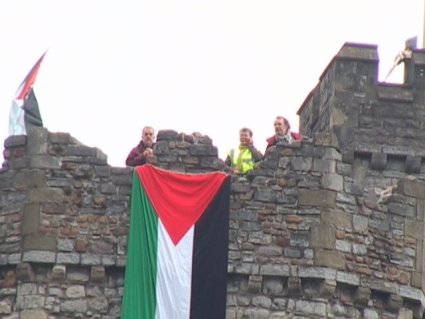