The blood of the martyrs will fertilize the earth 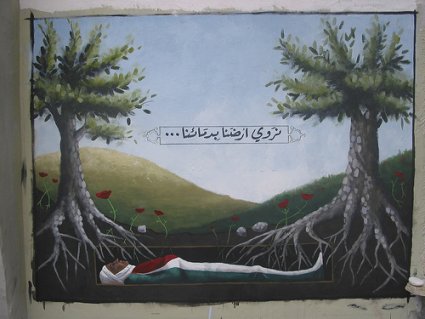 The finished mural, I wonder how long it will remain free of bullet holes?

On and off for the past few weeks I have been working on a mural in Balata refugee camp. The mural is to commemorate the approximately 350 martyrs from Balata since the beginning of the second intifada.

The Israeli Occupation Forces (IOF) invade the camp almost every night and terrorize the residents by destroying houses, arresting people, creating explosions and killing people usually between the hours of 12am-4am making it impossible for anyone to sleep.

There’s not a single family in the camp that doesn’t have at least one tragedy: someone killed, someone in jail for 20 years, someone crippled or disfigured from a gunshot wound. Some families have multiple tragedies.

If Balata was a tourist destination, you’d ask for your money back if there wasn’t an invasion while you were visiting.

I arrived at the end of Ramadan and all the kids were out in the streets playing Jews and Arabs with their brand new toys guns, imitating not what they see on TV, but the reality of their life in the camp.

With the help of camp residents, the wall for the mural was carefully chosen and prepared.

Work on the mural was dependant on the weather and also on the forecast of whether there were invading soldiers or not.

Fi shitta ilyoom? (Is there rain today?)
Fi (There is)

Fi jaysh ilyoom? (Are there soldiers today?)
Fi (There are)

The morning of November 3 I woke up to the sounds of an invasion, an exchange of gun fire on and off from about 2:30am-3:30am. At approximately 3:30am the muezzin announced there was a new martyr. His name was Ibrahim Snakreh and he was 16-years old. He was unarmed and was killed while trying to help his brother Ahmad, aged 19, who had already been shot.

A witness at the scene of the murder reported that Ibrahim heard shouting out in the street, ran outside and saw some of Ahmad’s possessions scattered in the street including his mobile phone which was ringing. Ibrahim picked up the phone in order to bring it to Ahmad, ran a few steps and was shot by a sniper in the back. The bullet emerged through his thigh. He died of his wounds at the hospital. The next day the Israeli media wrote that Ibrahim and Ahmad were terrorists planning a terrorist operation. Witnesses came to the conclusion that it was a random shooting, that snipers were shooting at anything that moved and that they clearly saw that Ibrahim was not armed and was only trying to help his brother.

Ahmad is still in the hospital recovering from his wounds.

There were sounds of explosions on and off for the rest of the night. No one slept much.

I watched Ibrahim’s funeral procession from a roof the next day.

The following three photos were taken at the funeral by an anonymous photographer from Balata:

As I was finishing the mural, I photographed some young kids as they put up the new martyr posters of Ibrahim. I recognized him in the photo as one of the kids who was watching me paint the day before. He had asked me if I’d seen someone, I said no I hadn’t, and then he left. Now he’s dead.

A taxi driver took me from Balata to Huwara checkpoint and told me he had seen me painting the mural. He opened the glove compartment of the car and pulled out 6 photos of 6 different men. “Kullu shuhada,” he said, meaning ‘all martyrs’. I asked if they were his friends, he said one was his brother and the rest were his friends.