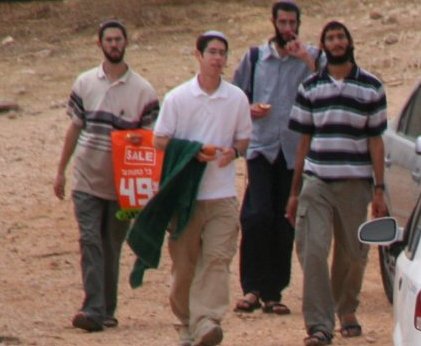 While harvesting with the Palestinians of Kufr Qallil, colonial settlers from Berakhya settlement were observed entering a Palestinian fruit grove and stealing fruit. The area in question is located south-east of Nablus city center, and surrounded by At Tur and Huwarra checkpoints, a settler-only road, and a military observation tower.

On a road cutting through the Palestinian fruit grove is a fountain used by colonial settlers to bathe. Today this fountain was especially busy as the local men ceremonially cleansed for the Jewish holiday of Yom Kippur, which was to begin that night. From their vantage point in the Kufr Qallil olive grove, international activists observed seven men drive into the area in three cars, take two bags from the trunk, and enter the grove. They then watched as the settler men stole figs and pomegranates, filling two large bags. This crime was caught on video, and while one activist filmed, two others hiked down the hill to intervene, after calling the DCO (District Coordination Office) to report the crime in progress.

The DCO was seemingly not interested in listening to the crime report, and appeared more concerned with why the activists were in the area. While waiting for the DCO, the activists approached three of the settlers and inquired as to why they were stealing fruit. The settlers responded by saying that the “law” allowed them to be in the Palestinian farmland, and that, “The law says [that] all Arabs are killers.” Pointing to the Palestinian grove, the settler continued, “All of this land is ours, we live in that village up there.” The “village” he pointed to is the militarized hilltop colonial settlement of Berakhya where the settlers reside.

After approximately twenty minutes, the DCO arrived, though at this point the settlers had left with their stolen fruit. The activists reported the crime for the third time, and showed the DCO more than fifty pictures documenting the incident. These pictures included the license plates of all of the vehicles, the vehicles themselves, and the faces of the settler thieves. The soldiers initially refused to record any of the information offered, but after repeated requests they looked at the pictures and wrote scant notes on a scrap of paper.

While reporting the crime of the seven settlers to the DCO and soldiers, another settler man with a child in his arms entered the grove and began to steal more fruit. The activists alerted the soldiers to this obvious crime going on in front of their eyes. One soldier entered the grove and spoke to the settler, though the settler proceeded to steal, and within a few minutes the DCO and soldiers left without stopping the evident crime. Before leaving, the soldiers told the activists to wait on site in order to report the incident to additional soldiers en route. No additional soldiers ever responded.