New
Home / Tales of the prophets: harvesting in the shadow of the settlements

Tales of the prophets: harvesting in the shadow of the settlements 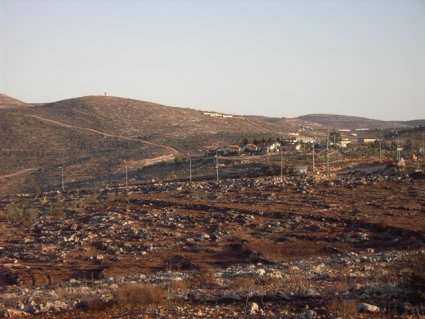 Itamar settlement and settler road on the land of Rujeeb village

“He turned his walking-stick into a giant snake that swallowed up all the others’ tiny snakes. And so the Pharoah knew that Moses was a prophet and not just a simple magician.” Rada, 29 years old, is telling us stories while we kneel along the edges of the tarpaulins picking up stray olives from the ground. Her voice is soft and soothing, almost like song, even though her English is taken directly from North American sit-coms. She especially likes Seinfeld and Friends.

Rada’s family are spread out along a mountain ridge some 300 metres from the Israeli settlement of Itamar, just west of Rujeeb village outside of Nablus city. The village is effectively an expansion of Balata refugee camp, built by families wishing to escape the insecurity and cramped environment of their former home. Perched on branches and standing on the ground pulling the olives off of the boughs with nimble fingers, we are cheerful but guarded. Despite the pretty surroundings and the spring-like weather, it is difficult to forget that the settlement houses and the perimeter fence with its alarmed gate loom menacingly behind our backs.

A settler militia van comes driving along the road and an armed settler steps out, opens the gate and looks around. A military jeep hurries behind it, screeches to a halt and soldiers step out to converse with the, seemingly self-appointed, settler deputy. After five minutes, both vehicles drive off and we discover that we have been holding our breaths all the while.

The day proceeds quietly. We finish picking the trees closest to the settlement and move on to a second plot of land adjacent to the settler by-pass road. In the morning, soldiers tell the international pickers present to get out of the area as it is a so-called “red zone”, implying that only people officially residing in Rujeeb may be there. Their will to enforce this rule, however, seems halfhearted and we are not interrupted again.

As we walk back toward the village, with Rada singing a Sami Yusuf tune written in ode to his mother, we pass through a valley framed by the main settlements and outposts of Elon Moreh and Itamar. Rada’s husband tells us about how settlers planted a bomb under the car of the mayor of a nearby village, crippling him for life, after he had brought the settlement’s claims of land ownership to the Israeli Supreme Court and won.

We decide to meet tomorrow at the same time and wave goodbye to the children, wishing them a goodnight in the village accent that they have tried to teach us all day. It has been a good day, promising plenty of good days to come. Welcome to the olive harvest in Nablus, where harvesting is resisting.