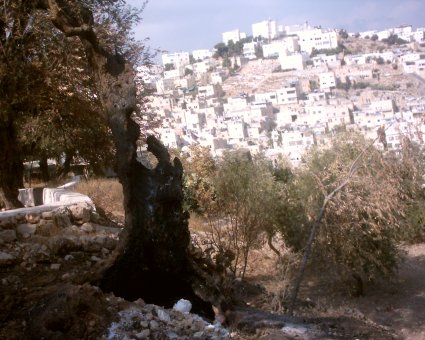 Olive harvesting will begin in Hebron after Eid, the Muslim festival that marks the end of Ramadam (the month of fasting during daylight hours). Palestinians will face restrictions on access to their land and harassment from Israeli colonists from nearby settlements.

Palestinians have been harassed in previous years by Israeli colonists while trying to harvest their olives. However this year internationals and Palestinians plan to cooperate to facilitate Palestinian access to their lands.

Many Palestinians in Hebron have olives to harvest close to the illegal settlement of Beit Hadassah and the cluster of settler caravans at Tel Rumeida. These trees are also close to an Israeli military base and a Palestinian home occupied by the Israeli army. Local farmers say that the Israeli army have refused permission for Palestinians to pick in the area close to the military base despite a Supreme Court ruling stating that olive picking should be facilitated in all areas of the West Bank.

Most Palestinians in the Tel Rumeida area have asked for an international escort when picking due to military restrictions and fears of settler violence.

Last year, prior to the olive harvesting period, Israeli colonists burnt 96 olive trees close to the Beit Hadassah and Tel Rumeida settlements. In the last months there have been three attacks on olive trees in the same area.

Problems are also expected in the area between Kiryat Arba and Kiryat Khamse, the Al-Grus Valley. In 2005 farmers in this area were prevented from picking their olives because of ‘security reasons’. Internationals plan to provide accompaniment for Palestinians picking in this area.