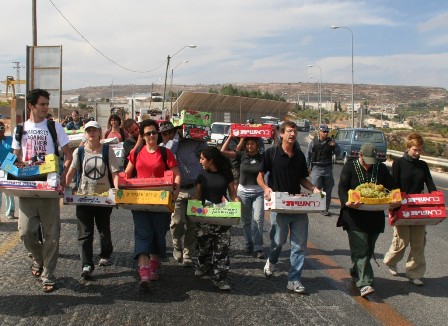 October 8, 2006-Today, Palestinian, international and Israeli activists joined together to demonstrate against land theft, road closures and economic isolation by bringing two tons of the surplus Palestinian grape harvest to an occupation checkpoint along Route 60. In a display of civil disobedience akin to the North American Boston Tea Party, the demonstrators hoped to dump the surplus harvest onto the road, but were viciously attacked before they were able to reach the checkpoint.

Al-Khadr is a center for vineyards, as is the Bethlehem area in general. Every year its fertile lands yield 11,000 tons of grapes. Not long ago, these grapes were marketed to the entire West Bank, as well as Jordan, Gaza and Israel. Nowadays, with some roads blocked and others closed, and with new decrees restricting the delivery of grapes, the local produce has no market. The prices have dropped so low that the farmers can no longer earn their living. Many are forced to just leave the fruit to rot on the vines. Soon the Apartheid Wall will reach the site of the demonstration, and the Ghettoization of the area will be complete. Where grapes are the prime source of income and unemployment rates soar, this maneuver will effectively strangulate the already fragile local economy. 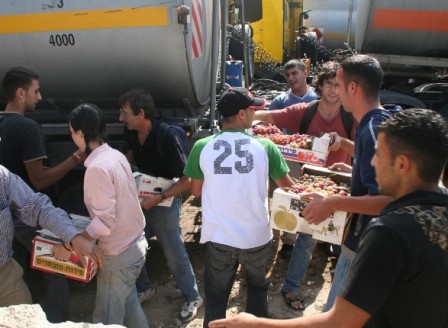 The wall in the Al-Khadr region will annex 20,000 dunums of Palestinian agricultural land, while the expansion of Betar Illit, Neve Daniel and Elazar colonial settlements will similarly steal additional lands. The Wall in the Al-Khadr and Bethlehem area will also imprison 19,000 Palestinians in between the concrete barrier and the 1967 West Bank border line, known as the “green line.”

For these reasons, local Palestinians, Israeli activists with Anarchists Against the Wall and Tay’ush, as well as international activists with the Palestine Solidarity Project (PSP), joined for a morning of civil disobedience with the intention of dumping a portion of the ample, though unmarketable, grape harvest onto Route 60 in protest. Approximately fifty demonstrators marched on Route 60, blocking northbound traffic, en route to Al-Khadr checkpoint, but were preemptively attacked by Israeli Occupation Force (IOF) police and soldiers. At the scene were numerous armored police jeeps, police transport vans and armored military jeeps. Also on hand was at least one agent with Shabak (Shin Bet), the occupation’s covert intelligence agency, seen filming the IOF’s brutality with a handheld video camera.

Despite the presence of Reuters cameramen and other international media, around thirty IOF soldiers and police quickly attacked the non-violent demonstrators who carried cardboard crates of grapes. With their hands unable to be used as shields, many were beaten causing the grapes to prematurely spill onto the road. As the demonstrators attempted to continue their march, IOF police and soldiers choked, kicked and punched the demonstrators. Some police used military-style ‘pain compliance’ maneuvers, such as applying immense pressure to wrists and other sensitive joints, as well as wrenching back fingers and hands. Activists were thrown, and dragged by their ears, noses, necks and hair, while other police and soldiers forced demonstrators to the ground by leaning their weighted knees onto demonstrators’ heads and necks. Many activists were roughly thrown to the ground and dragged across the asphalt road, ripping their clothes. While attempting to stand up, many were pushed and kicked by the booted IOF police and soldiers. 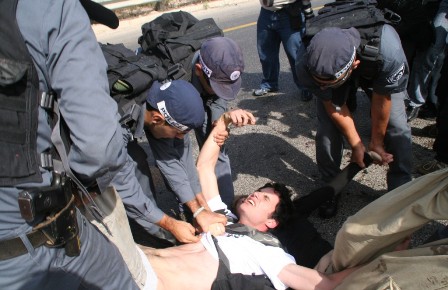 During the assault, six people were arrested: two Palestinian males, one international female, and two Israeli males. The two Palestinian males, Mohammad Salah, 25, and Ahmed Salah, 30 were detained for carrying boxes of grapes, and while Ahmed was released at the end of the demonstration, Mohammad was not so lucky. Following the demonstration, Mohammad was taken by IOF soldiers to a wooded area near Betar Illit colonial settlement. When the soldiers reached this isolated area, they kicked and beat Mohammad in the head and shoulders. He is currently under care at a Bethlehem-area hospital. The international, an American woman, and the two Israeli men are currently still being held in Israeli custody at Gush Etzion police compound, housed within the colonial settlement of the same name. 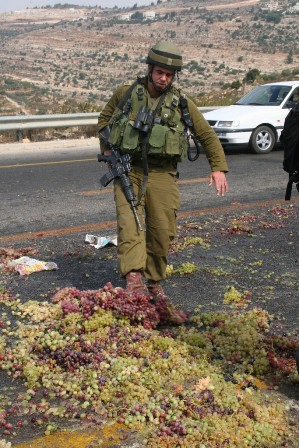 Despite the unprovoked and extreme violence from the IOF, the demonstration was a great success. The primarily settler-used roadway of Route 60 was colored green and purple with the crushed remains of grapes and cardboard cartons. Passing settlers were able to witness the violence that their presence “necessitates,” and many reacted by honking their horns, photographing the demonstration, and one man was even seen proudly waving a peace sign. Though the grapes never reached the mouths of consumers, they were purchased from the farmers and given a political purpose on the road-a stretch of route 60 bordering Al-Khadr checkpoint, as well as a currently under-construction terminal checkpoint, and a small length of the Apartheid Wall already built and waiting to be connected to the Bethlehem portion.