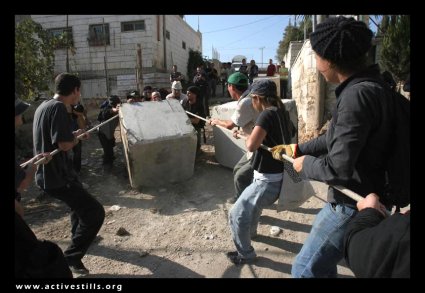 This afternoon, Palestinian, international and Israeli activists carried out two non-violent demonstrations focused on two illegal roadblocks in the al-Khalil (Hebron) region. Roadblocks in al-Jab’a and Beit Ommar were chosen, and while the demonstrators were unable to open the first roadblock, the barrier in Beit Ommar was successfully opened. Large forces of occupation soldiers amassed at both demonstrations, and brutally beat many present.

Following Friday prayers in the village of al-Jaba, thirty five internationals and Israelis, and more than forty Palestinians, marched from the village mosque to the earth mound roadblock. The internationals represented the Palestine Solidarity Project (PSP), the International Women’s Peace Service (IWPS), the Christian Peace Makers Team (CPT), while the Israelis were from Ta’ayush, and Anarchists Against the Wall. This demonstration marks the third time in three weeks that demonstrators met at the al-Jaba’a roadblock to dismantle it. Last week, the demonstrators were successful in their efforts and were able to open the roadblock. This week however, soldiers and police with the Israeli Occupation Force (IOF) preempted the action and attacked demonstrators.

When the non-violent demonstrators reached the roadblock separating the village of al-Jab’a from the village of Surif, they were met with numerous IOF army jeeps, police jeeps and one car carrying officers with the Shin Bet, the occupation’s secret intelligence service. The military interfered in the demonstration, but the activists were able to work for approximately forty-five minutes, before IOF soldiers began to attempt to make arrests. At their peak, over thirty soldiers, eight police, and two Shin Bet agents were present. Along with the soldiers, two police jeeps, six army jeeps, and one Hummer were present. The soldiers took various attack positions, including placing three soldiers on the roof of a Palestinian house, armed with machineguns and tear gas launchers.

With the IOF present, the activists used shovels, pick axes, and hoes to remove rubble, dirt, and heavy boulders forming the roadblock. Following forty-five minutes of roadblock removal, the IOF accelerated their violence. Because of the IOF’s massive presence, and their high quantity of ‘less-than-lethal’ weapons at the ready, the demonstrators decided to disperse rather than begin a confrontation with heavily armed soldiers. As they started up the hill to al-Jab’a, the IOF attempted to arrest one Palestinian man but he was successfully de-arrested by international and Israeli activists.

After leaving the al-Jab’a roadblock only partially removed, and not wanting to waste the remainder of the day, some of the Palestinians, along with the entire international and Israeli group traveled to the village of Beit Ommar to remove a second roadblock, consisting of four concrete blocks weighing two tons a piece. This time the activists were able to arrive undetected, and work for a short while before IOF soldiers and police responded. The demonstrators used thick ropes and metal carabineers to harness the blocks, and utilizing the strength of more than forty people, moved three of the blocks, opening the road. In order to move each block, ropes were attached to hooks implanted in the blocks, and while approximately thirty people pulled on the two ropes, others pushed from behind. Through this method, the demonstrators were able to move three of the four blocks, creating a path for cars and tractors to enter the village. By opening this road, residents of Beit Ommar are able to enter their village without passing through the checkpoint which includes an observation tower and a metal gate.

After moving two of the concrete blocks, soldiers with the IOF arrived. More than forty IOF soldiers and police assembled, along with six army jeeps, one Hummer, two police jeeps and one army transport. Quickly the soldiers began to attack the non-violent demonstrators. During these attacks, the following injuries were sustained:

– Palestinian man, struck in the abdomen with a rifle butt, piercing the skin.
– Swedish woman, deliberately pinned between a concrete block and an army jeep. She jumped away and narrowly escaped being crushed. She was later assaulted, and thrown against a concrete wall.
– Swedish man, punched in the head and thrown to the ground via his head, injuring his neck.
– English man, struck several times on the forearm with a rifle butt, causing severe swelling.
– Danish woman, struck in the head with a rifle butt and stomped in the feet, causing immediate bruising and swelling.
– Swedish woman, bitten on the forearm by a soldier, causing localized swelling.

Besides these specific and remarkable injuries, many demonstrators present were punched, choked, pushed, thrown to the ground and otherwise assaulted by occupation forces. International activists witnessed at least three Palestinian men being beaten, though the details of their injuries are unknown. During these encounters, IOF soldiers attempted to arrest three Palestinians but were unsuccessful thanks to the efforts of international and Israeli activists who were able to successfully de-arrest the Palestinians through non-violent intervention.

After these initial attacks, IOF soldiers focused on a Palestinian home bordering the roadblock. IOF soldiers threw at least one concussion grenade, and fired what appeared to be a rubber-coated metal bullet through the window of the Palestinian home. When the shot was fired, several women and children were peering out of the windows at the soldiers, but were luckily not hit by the bullet or glass.

The roadblock in Beit Ommar was removed and the road opened, though it was soon blocked by four army jeeps who attempted unsuccessfully to replace the concrete blocks. The IOF soon learned how heavy the blocks were, as their armored jeeps were unable to budge the barriers. Though the roadblock is still open at the time of writing, it is likely only a matter of hours before the IOF replaces the illegal barrier, bottlenecking Beit Ommar, and forcing residents to travel through the militarized checkpoint. Just as the earth mound in al-Jab’a will also be replaced soon after its dismantlement, its partial removal is yet another act of resistance in a long chain of actions opposing the occupation. Palestinian, international and Israeli activists will continue to remove such manifestations of oppression which create closures, and restrict the free movement of the Palestinian people.

For information on the previous actions in al-Jab’a please visit: