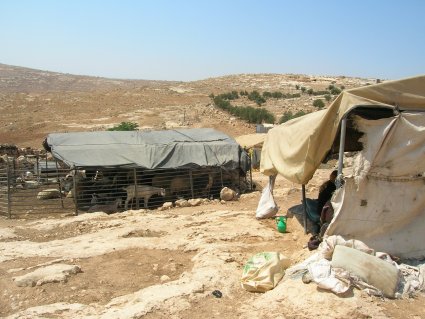 16th September 2006: A Bedouin family near the village of Susia was visited today by a group of internationals and Palestinians working for the PSP (Palestine Solidarity Project) and ISM. An illegal Israeli settlement has been built to the south-east and the Palestinians’ land is being steadily encroached on. Abed Alrhmam Mousa has lost a huge amount of his grazing land already. In the last couple of days the settlers have erected tents only a kilometer from Abeds family.

They are continually harassed and attacked by the settlers, who come sometimes by night but often in the morning, attacking both the family in their shelter as well as targeting individuals grazing the sheep. At present they are being attacked at least twice a week. In April of this year Abed was attacked badly, resulting in him needing 25 stitches in his head. His brother came to help and was attacked with a knife. Abed has reports from the hospital and the police, who took details (having taken 3 hours to arrive) but have done little else. 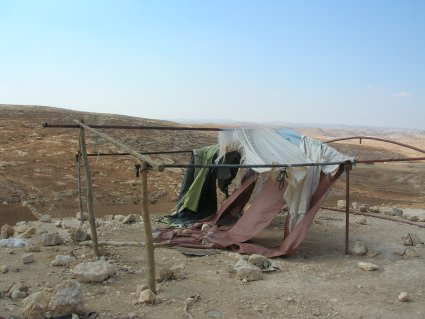 Two months ago the settlers set fire to, and burnt down a tent and shelter. A family were inside at the time. In the same area, last year, the Palestinians planted 1000 olive trees. As soon as they left, the same day, the settlers tore them up.

The settlers continue to bring their sheep onto the Bedouin communities’ land and steal water from their wells.

When they come to attack, they always carry guns, often M16s, and sometimes smaller hand guns also. At times they have used Mace (chemical tear gas spray). These attacks have been reported many times. The Police say they will help but have done nothing. When internationals have called for help from the army, they have taken at least an hour to arrive (they are based 5-10 minutes away). In contrast, when the settlers have called for the army, they arrive promptly, always siding with and supporting the illegal settlers.

The families have asked for help in the form of a permanent presence of internationals to deter further settler attacks.

Last week an Oxfam water tanker supplying Palestinians in Susya was disabled by settlers who threw dozens of metal spikes on the road. This was just the latest attempt by settlers to force the Palestinians from their homes.