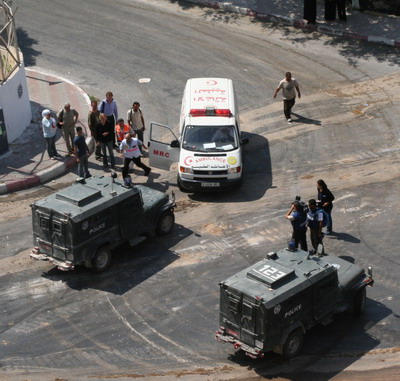 To view a video of the initial violence of the Israeli military and a collective punishment click here.

Nablus, Palestine–Today, August 26, 2006, in the Jabal Shamali neighborhood of Nablus, soldiers of the Israeli Occupation Force (IOF) launched a 16 and a half hour incursion, wherein they killed one young boy, hospitalized at least twelve with many more injured, and destroyed twenty homes and apartments. The IOF entered the area around 2:00am, with over 26 military vehicles including armoured jeeps, hummers, border police jeeps, a Caterpillar D9 armoured bulldozer and Caterpillar “excavator” wrecking machines.

Upon entering the area, the army went to the Labbada house, a three-story building, built in 1927, and home to over seventeen families, including eights flats housing members of the Labbada family. Immediately after entering the area, the soldiers used loudspeakers to order the residents of the building to leave within one minute. At this time, seventeen families exited the building, and were detained on the street, from 2:00-4:00am, while IOF soldiers fired live ammunition over their heads. 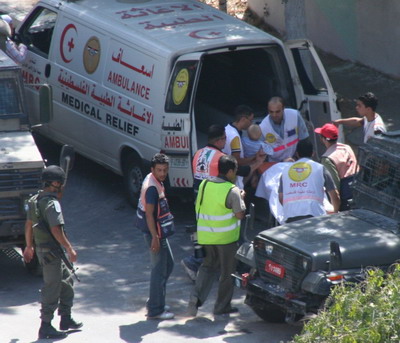 Upon seeing the bulldozers, the families of the Labbada house made repeated offers to act as shields for the soldiers in order to allow them to enter the building to search for the target of the raid, but the soldiers refused, and soon began to demolish the homes. At 4:00am most of theresidents were released and allowed to enter the home of a neighbor, but one elderly man, approximately eighty years old, was further detained until around 9:00am when he was released.

At 3:00am, with the residents still detained in the street, IOF bulldozers and “excavators” began to demolish small homes surrounding the Labbada complex, in an attempt to reach the three-story building. Once the building around the Labbada house had been completely demolished, the army began to demolish the three-story building from three sides. At this time, soldiers entered the At Tamimi building, a two-story home adjacent to the Labbada complex, and used the top floor as a sniper position. At 9:30am, five men were kidnapped from the neighboring house and forced to enter the apartment being used as a sniper nest to act as human shields for the army.

The army proceeded to demolish at least three homes bordering the Labbada complex, and an additional eleven flats within the complex. While they demolished the homes, the army fired almost constantly into the building, while also firing at demonstrators with live ammunition, tear gas and concussion grenades. During this assault, the soldiers repeatedly fired explosive grenades from M-16 assault rifles into the building’s windows. 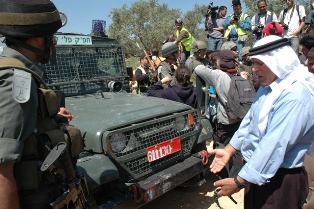 While demolishing the homes, the army crushed at least eight automobiles, and utilizing a bulldozer, dropped three of them on a neighboring house. Also during the attack, IOF soldiers entered the adjacent children’s’ school and after knocking out the windows, used the area as a firing position to shoot at demonstrators. In addition, Palestinian medical volunteers reported that around 5:00pm, a large fire was seen blazing in the
Labbada house, the result of repeated IOF grenade fire. 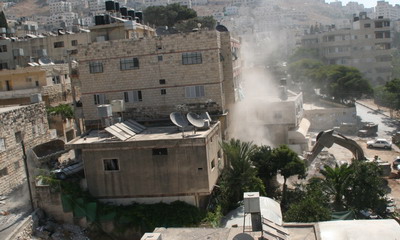 During the demolition, young Palestinian demonstrators gathered on and around Amman street, and were fired upon repeatedly. Rafidia hospital has confirmed that during these clashes, Muntasir Sulaiman Muhammad Ukah, 15 from Askar refugee camp, was shot in the back and killed. Rafidia has also confirmed treating an additional 12 persons for injuries, they are: 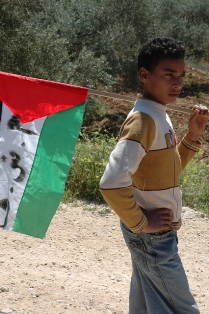 Local news sources report an additional ten injuries but only those named were transfered to Rafidia hospital. On at least two occasions, IOF soldiers prevented Palestinian ambulances from reaching injured persons in a timely manner.

The target of the incursion is unclear, but IOF soldiers arrested Nizar Labbada, 30 years old, before leaving the scene at 6:30pm. This is not the first time the 79 year old building was raided. In 2004, IOF soldiers attacked the building on four separate occasions in search of Firaz Labbada, now 34. Firaz was arrested in 2004 and is currently imprisoned until at least 2008.