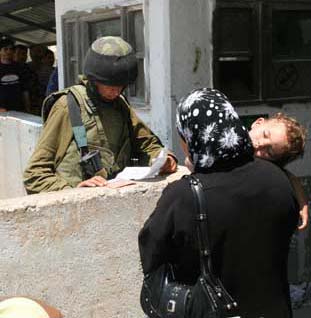 by Woody, Miss J and Ernesto

There is continual harrassment and human rights abuses at Beit Iba checkpoint, northwest of Nablus, which connects the largest city in the West Bank to Tulkarem and Jenin. Students and patients travelling in ambulances are routinely stopped, as human rights workers witnessed yesterday, August 7th. One international travelling through the checkpoint was also arrested, apparently for taking pictures.

Human rights workers monitoring the checkpoint reported that three students of Al Najah University were detained by Isaeli soldiers, which means that they were pulled out of line and put into a pen surrounded by razor wire until their name was cleared. It is necessary for these young men to travel through this checkpoint daily in order to attend the university.

There were an additional 15 men detained between 20 minutes and 3 hours. They reported to the internationals that they are detained almost daily because the last four digits of their ID numbers are the same as those of “wanted” individuals (meaning the Israeli army wants to arrest or assasinate these people). Some soldiers acknowledged that these men, many of whom are students, cross the Beit Iba checkpoint daily and are known to not be “wanted”. However, they still could not explain why these men are detained regularly nonetheless.

Ambulances with their lights on were stopped at the vehicle crossing and required to provide documentation and undergo a rigorous inspection in order to clear the checkpoint and transport their patient to the nearest hospital.

The human rights workers spoke with the soldiers on duty and negotiated the crossing of several men across the checkpoint, despite official military orders that no men between the ages of 15 to 35 are allowed to cross under any circumstances. The Israeli authorities claim that it is a security risk to allow men of this age group to cross the checkpoint.

An international woman from Sweden, not working with the group monitoring the checkpoint, but on a tour with a group to Jenin, was arrested. The group noticed a Palestinian man being arrested although he had on a leg brace and said he was on the way to the hospital. She asked the soldiers why he was being held and took some photos after which the soldiers told her to stop or they would call the police. They passed the checkpoint and went to get food and water. When they returned the police had arrived and directly targeted the international who took pictures. The police were very aggressive and informed her that a soldier had filed a complaint against her, which justified her arrest.

The police took her to Qedumim settlement police station and then Ariel settlement police station and threatened to deport her. They asked her to sign papers agreeing she will stay out of the West Bank. She reported that,”They tried to bribe me with offers of ‘only being excluded from Nablus’. I said I wanted to move about freely: ‘Is Israel not a democracy?’ I said. They finally let me go with no papers being signed.”