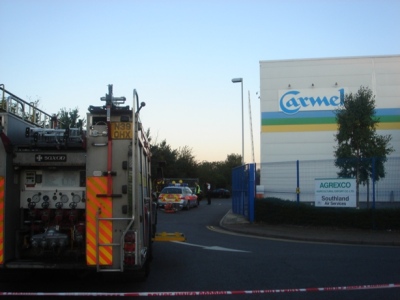 The action follows a legal warning letter to Carmel stating clearly why they are in breach of the law. 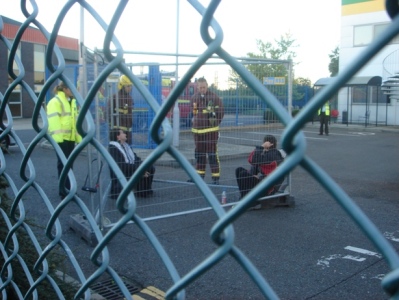 Protestors used wire fencing and bicycle D-Locks in a well planned blockade at the two entrances to the building.

Before taking part in the blockade, many of the protesters had witnessed first hand the suffering of Palestinians under Israeli military occupation.

This follows on from an action of 11th November 2004, when seven Palestine-Solidarity protesters from London and Brighton were arrested after taking part in a non-violent blockade outside the same company.

Last September a Judge ruled that Agrexco (UK) must prove that their business is lawful. The acquittal of the seven activists before they were able to present their defence meant that the court did not have to rule on the legalityof Agrexco-Carmel’s involvement in the supply of produce from illegal settlements in the occupied territories.

Today’s blockade aims to draw attention to this company’s complicity, in murder, theft and damage of occupied land, collective punishment, apartheid and ethnic cleansing, and other breaches of International Law.

Report on Carmel’s Involvemnt in the Jordan Valley

War on Want’s Report –”Profiting from the Occupation”