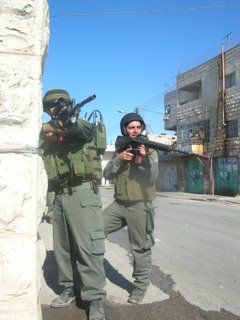 Journal entry by Ernesto. Provides a deeper insight to a previous ISM eyewitness report about the same incident.

After visiting the family of Yusuf Abumariya we headed to the house of another family. We were served tea and fresh fruit and before we were able to fully get the gentleman’s name and story, Ahmed, one of our local contacts got a call that Musa’s house had been teargassed and that his brother was in a car accident. We gave our shukrans and immediately ran out the door.

We found Musa’s sister and others frantically cleaning the house with soap and water, eyes tearing and gas hanging heavily in the air. Apparently the family was sitting in their garden on the side of the house when Jeish rolled by and shot two canisters of teargas at the house. One of the volunteers who was staying in the house went after them.

We thought about splitting up, half staying behind and the others going up to the main road to document any military activities, but our feet did the voting and we all ended up on the main road. What unfolded before our eyes is still inexplicably absurd. The main street of Beit Ummar was under seige by a Hummer, two smaller jeeps, and a platoon of young soldiers. It looked like a scene out of a war movie.

It was’t clear what was going on. Soldiers were letting some cars through and turning others away. Old women held grandchildren’s hands a little tighter as they walked through the street. One thing was for sure, the soldiers were in town and their presence was making people very uneasy.

One of the Humvees crashed into a taxi causing 1000 shekels worth of damage. The cab belonged to Ahmed’s brother and he was staying with some more of our folks trying to get some answers. We managed to fight fear and walk by the Jeish and through them to assess the situation.

Up ahead Jeish were rolling deeper into town and taunting shebab into wargames. Young soldiers took their positions, tucked safely behind the armor of their jeeps. They rolled passed old ladies who sat on their stoops gazing at this mini-invasion through tired eyes.

This carried on for about two hours. Jeish changed positions, held positions, talked into their walkie talkies and stood by buildings and in little alleys. In packs of four or at times in pairs. They reminded me of me and my friends playing G.I.Joe as kids in Riverside Park.

Their opponent, mighty as mice, were shebab. Those teenagers who defied their parents orders to go inside and stay out of trouble. Los que buscan problemas. Those who find dignity in never backing down to an enemy with far more superior equipment and orders to shoot. For two hours the Jeish deliberated and comiserated about how many times they would shoot rubber bullets at kids who scurried back and forth, drawn into the wargames, proving an uncertain sense of manhood in the face of hate.

Eventually, the Jeish retreated. They may have received orders to, or maybe they realized the absurdity of their existance -shooting rubber-coated metal bullets at kids who threw stones and slung them with makeshift slinghsots. But more realistically they were ordered to retreat, because men so entrenched in the work of occupation rarely realize the absurdity of it. My audible comments about how pathetic it was for a bunch of young men to position themselves and shoot at children was rejected with a perfect American-english “Could you please shut the fuck up.” I have heard young Zionist Americans make sure to serve their compulsory military service in Israel in order to ensure their citizenship and glory.

In the end the shebab won the Battle of Beit Ummar. Every time the children face off against the military, and cast stones, and suffer no casualties, they win. The occupation grows a little weaker, perhaps not in a material sense, but certainly in the spiritual. The young shebab regain a little bit of dignity -a dignity that is at stake under the heels of occupation. Let’s be clear, stone throwing is not encouraged by the majority of the adults. Many scuffles break out between paternal adults and rebellious youth, but boys will be boys. And if Jeish will be Jeish, Shebab will be Shebab.

In the meantime, Jeish detained the taxi driver, we rushed to the D.C.O [detention center] to await his release, and returned to the village with him for another cup of tea.