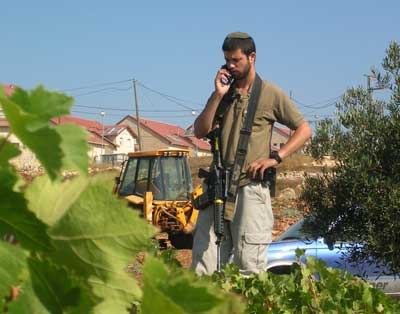 At 8:30am on Sunday, July 30th, six internationals accompanied Abu Ayyash and Yousef, both farmers, and Ahmed, a local organizer, from Beit Ummar, to spray their grapes with pesticides. Despite aggressive activity by settler militia and an Israeli military presence, the farmers successfully completed their tasks.

The Karme Tzur settlement has been constructed directly across the street from the farmer’s grape vines. The farmer’s plot of land is bordered on two sides by a paved road that carries settlers in and out through a gate with a guard post. The settler militia is extremely hostile to Palestinian farmers working their land, referring to them as “terrorists.” 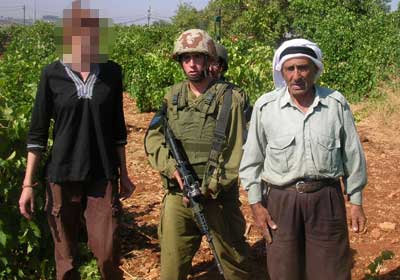 When we arrived, one international who had accompanied these farmers before noticed that a dirt road had been created where grape vines once grew. There were pink ribbons on some of the vines that remained that might have signaled the path of the road. The bulldozer was parked a few meters away on the other side of the settler road. It was probably the one that bulldozed over a few dozen grape vines on this plot alone and countless numbers on farmlands around the settlement.

As the farmers sprayed their vineyard, four settlement guards arrived and one attempted to enter the land by force but was called back by his comrades, when he couldn’t manage to get past internationals who demanded to know why he was entering land that didn’t belong to him. 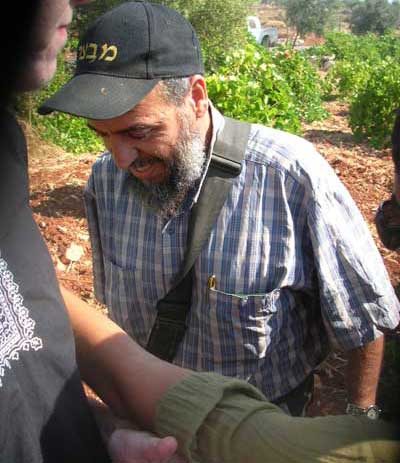 Another settlement guard began to become verbally abusive and taunt the farmers and internationals by making fun of the greeting “salaam”, and plainly stating “You are my enemy! If you come here with Palestinians and have no military permission you are my enemy.” He also attempted to enter the land proclaiming, “This is my land!”

The military also attempted to remove the farmers from the land saying that the Palestinians need to get permission from the military to be on land so close to a settlement. However, we were able to stall the military and the settler militia long enough for Abu Ayash and Yousef to finish their work for the day. Unfortunately, Abu Ayash is afraid that the next time he is due to spray his grapevines, there will be none left, either as retribution for his summoud (steadfastness) or to pave a wider road.

We will provide Abu Ayash with photos of the land for his legal battle to protect his rights and property.