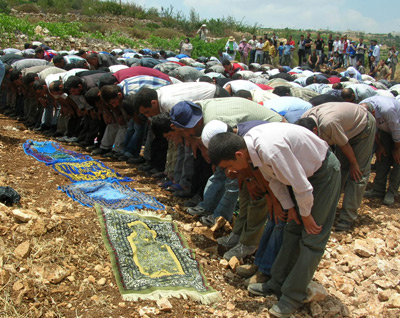 by Ernesto in Beit Ummar

Today, Friday July 7th, 2006, at noon, over 300 farmers and residents of the Palestinian villages of Beit Ummar and Halhoul held Friday prayers together on their land that has been ravaged by Israeli bulldozers in the past week. International and Israeli supporters accompanied them in a non-violent march to the land in order to observe the activities of the military and the settlers, and support their struggle against the illegal expansion of the settlement Karme Tzur.

They demonstrators marched around the settlement on the land where trees and grape vines have been uprooted because of the construction of a new wall that will enclose the settlement, illegally annexing Palestinian land to it. The residents, mostly men and children, carried signs that said, “No to the Policy of Damaging Land and Human Beings” and other things. The Israeli soldiers attempted to stop the demonstration but eventually they passed. 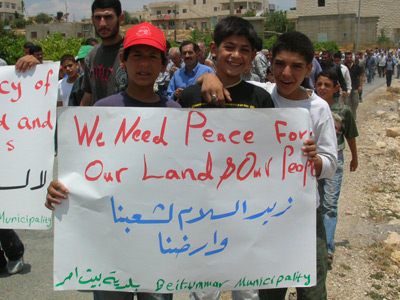 The march and prayer were beautiful and non-violent, however armed settlers descended on the group and waved their rifles in the air as they called in reinforcements from the military. More military arrived and they lined the hill above the demonstrators as prayer services ended. 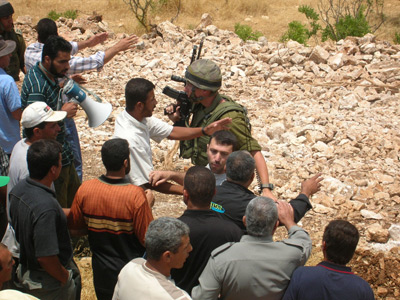 While the majority turned back to the village after prayers, the army prevented those who wanted to stay from being on their land. They were told that they were too close to the settlement. 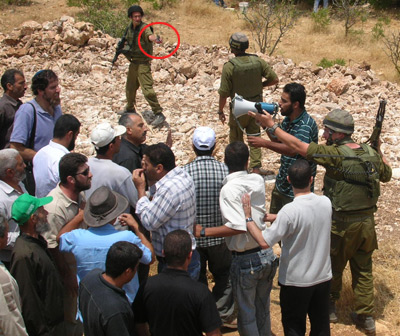 Young kids threw stones at a light pole and then the soldiers began to shoot rubber bullets at the young kids. Eventually the soldiers shot many rubber bullets and tear gas grenades. One young man named Saqir Sadiq Abu Mariya, 35, was shot by a rubber bulet in the torso and taken away by an ambulance. Many people fled the scene because the gas was becoming unbearable. 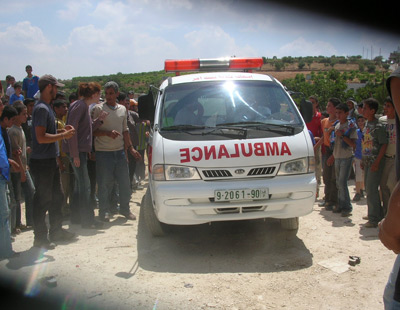 At 7pm this evening, three jeeps entered the village shooting tear gas, rubber bullets, and sound grenades at people in the streets for about an hour. Keefeh Kamael Bahar, 20, was taken from his home and arrested during the raid of the village.

Non violent activist and organizer Musa Abu Mariya, 28, is still imprisoned by the Israeli military after being arrested when he lay down in front of an Israeli bulldozer tearing up Beit Omar lands on July 4th. Palestinians can be held without, any charges or access to a lawyer for eight days before being brought in front of a military judge who can prolong the period. According to a report by the Public Committee Against Torture in Israel (PCATI), “Each month, hundreds of Palestinians were subjected to one degree or another of torture or other cruel, inhuman or degrading treatment (ill-treatment), at the hands of the GSS (General Security Services) and bodies working on its behalf. ”

Please donate to the ISM legal fund so that we can offer legal support to these Non-Violent activists!