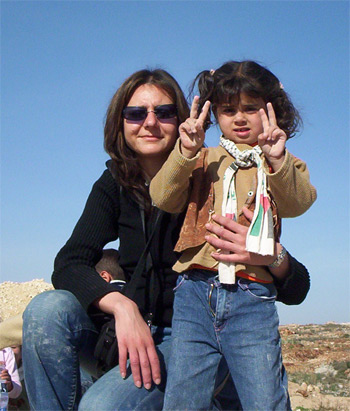 Maria Nikiforou with a child from Bil’in in 2005

Today, July 18, 2006, Maria Nikiforou will celebrate her thirty-fourth birthday in isolation in the Ben Gurion detention center. Israeli security put Maria in isolated detention on July 14th and is denying her entry, saying that she is a security threat to Israel. Yesterday the authorities took away her cell phone, even though it is allowed for detainees to have their cell phones in this facility.

She is the second international in the last two months to have been denied entry to Israel because of their affiliations with the International Solidarity Movement (ISM). The ISM is a Palestinian-led movement supporting non-violent resistance to the occupation and Apartheid Wall. Their activities include demonstrations, accompanying Palestinian farmers to their land, and documentation of human rights abuses.

Maria’s lawyers filed an appeal on her behalf, and the state has responded saying that the reason she is denied entry is because she is a member of ISM, and didn’t state that upon entry to the airport. The judge is expected to set a court date within the next few days.
Israel continues to control all the border crossings in and out of the West Bank, as well as the border crossings used by internationals to travel in and out of Gaza. Israel has denied entry to thousands of peace activists in the past three years and completely denies foreign nationals the right to visit Gaza, except those with permits that are very difficult to obtain.