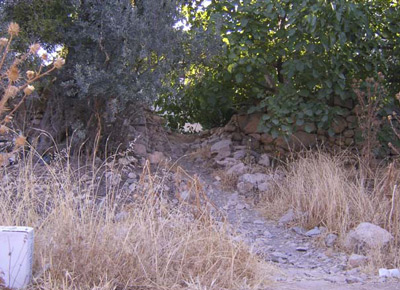 The back entrance to the Abu Haykal family’s home. The Israeli military is now confining them to this rather than the front of the their home.

The Hani Abu Haykal family, which lives directly opposite the Tel Rumeida settlement in the Tel Rumeida neighborhood of Al-Khalil (Hebron), has received a written military order declaring the street in front of their house a closed military zone until November 3rd, Abu Haykal told human rights workers today. The order prevents Abu Haykal and the nine other members of his household from using the main gate to their home, forcing them instead to use a rough, roundabout path through olive groves to reach their jobs, shopping, or anything else.

The order is in direct contradiction with an order previously issued by the Israeli High Court allowing Hani Abu Haykal and his family to use the street. The family’s lawyer has gone to court in an effort to have the recent order lifted. Hani said he has also asked the ICRC (International Committee of the Red Cross) for help with the problem, and monitors from TIPH (Temporary International Presence in Hebron) claim their group is also trying to get the order lifted. For now, though, the family is complying with it.

According to Hani Abu Haykal, the order, in Hebrew and Arabic, with an accompanying map, was delivered at around 6 p.m. on Thursday, July 6th by an officer from the Israeli civil administration who identified himself as Hamoudeh. The order applies only to Palestinians, not to people with Israeli IDs. When Abu Haykal asked why the order had been issued, Hamoudeh said it was because the military anticipates that there could be problems in the area in the coming months. When Abu Haykal objected that the back way in and out of his home wasn’t suitable for everyday use by the family, which includes an elderly woman and another woman with heart problems as well as several children, the officer looked at the pathway and pronounced it “not bad,” according to Abu Haykal.

The issuing of the order closing the street to Hani Abu Haykal and his family follows by roughly three weeks an incident in which Hani and his son Jamil, 13, were attacked and beaten by a solider and approximately 20 settlers as they tried to enter their front gate on their return from the family’s shop in the nominaly Palestinian-controlled part of Al-Khalil (H1). The pair had already passed three Israeli checkpoints, but the soldier stationed in front of their house demanded to see his ID and then declared that he was not permitted to enter his own gate. Hani explained that he had an order from the Israeli High Court guaranteeing him the right to use the street to reach his house, but the soldier refused to listen, pointed his gun at the pair, and cocked it. Meanwhile, settlers gathered in the street and began throwing stones. Abu Haykal and his son were forced by the soldier to turn around and travel back down the street through the crowd of stone-throwing settlers and walk approximately a quarter mile around the Tel Rumeida hill to the path leading to the back entrance of their home.

Human rights workers live just down the street from the Abu Haykal house but are not permitted to use the road either. Instead, they must use the same roundabout way to visit the family.

Abu Haykal also reported that the family has been trying to get a new phone line installed in their home, but has been unable to to get permission for a worker from the phone company to visit the house to do the installation.

In another ominous development Hani Abu Haykal said that soldiers recently visited shopkeepers in the Baab al-Zawiyye business district, in H1 near the Checkpoint 56 entrance to Tel Rumeida district. After checking their IDs, the soldiers reportedly told the shopkeepers that their shops might be shut down and the area declared a closed military zone in the future.

Abu Haykal’s mother has a heart condition and was seriously ill recently. As Palestinian vehicles, including ambulances, are not allowed into Tel Rumeida, Abu Haykal had to negotiate for two days with the Red Cross and the DCO (District Command Office of the military) to allow an ambulance into Tel Rumeida to pick up his sick mother. When permission was finally given, the ambulance was held up at a checkpoint near the Beit Romano settlement for seven hours because soldiers insisted that the ambulance must wait until an army Jeep could escort it into Tel Rumeida.

When the ambulance finally arrived at the Abu Haykal house, soldiers insisted that they needed to examine it. They removed all of the equipment from the ambulance and checked under the hood. This took half an hour. As Abu Haykal’s mother was carried from the house into the ambulance, settlers began throwing rocks. Soldiers did nothing to stop them.

Abu Haykal’s mother was so ill at this point that she was kept in the intensive care unit for five days and ten days total in the hospital.

After she was released from the hospital, the ambulance waited for five hours at the roadblock leading into Tel Rumeida for soldiers to let it in.

The family complains of isolation because their friends and family are too afraid to visit them. This is especially distressing for the children when it is their birthday.

When school is in session, Abu Haykal leaves work to walk his kids home in order to protect them from settler attacks. On Saturday, the Jewish sabbath, when many settlers are out on the street, the Abu Haykal children go directly from their school to their father’s work and wait to go home until he is done because it is too dangerous to go home during the day.

Recently Abu Haykal’s car was set on fire by settlers. Witnesses said soldiers were present and did nothing to stop the torching of the car.