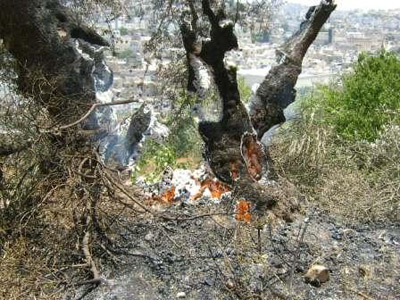 by Harry in Tel Rumeida

July 5th: A fire apparently set by Israeli settlers destroyed a large and obviously ancient olive tree in the Tel Rumeida section of Al-Khalil (Hebron) today. The tree, located about 100 meters west of “Abraham’s Well,” belonged to the Abu Ghalyoun family, according to a Palestinian fire fighter quoted by the International Middle East Media Center. The fire was reported in mid-morning to the municipal fire brigade, which dispatched a truck to the area, but the fire fighters were unable to get equipment directly to the burning tree [Palestinian vehicles are not allowed on the road in the Israeli-controlled H2 area under which Tel Rumeida falls]. They used pails of water to put out the flames in the grass surrounding the tree, preventing damage to other trees, but their efforts to extinguish the fire in the tree itself were not successful. Twenty four hours later, the fire continues to smoulder, and the targeted tree is almost completely destroyed.

While there is no conclusive proof that Israeli settlers started the fire, they have in the past set many other fires in the area – including one that burned two dunams last month – as part of their decades-long campaign to drive Palestinians out of the Tel Rumeida neighborhood. 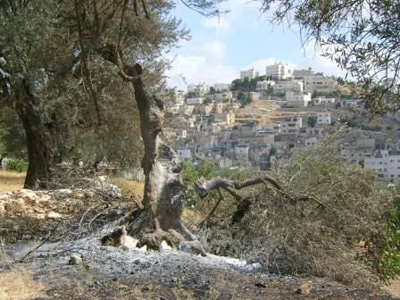