New
Home / Reports / “It is my land not the settlers’ land”

“It is my land not the settlers’ land” 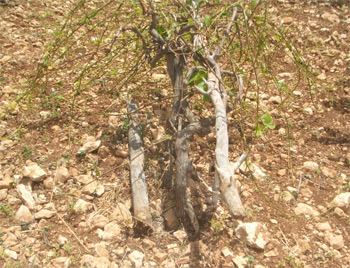 Muhammed Abu Solayby from Beit Ummar village near Hebron has suffered heavily from the settlers from the nearby settlement of Beit Ai’an. They have destroyed many of his grape vines, fruit and nut trees, and even beat Abu Solayby severely last year. He was injured enough that he was admitted to the hospital.

He has filed eight different police reports with the Gush Etzion settlement police, who are the commanding police force for Beit Ummar and the settlements in the area. The police have done nothing to stop the violence or the destruction of Solayby’s property, and, recently, the police have gone a step further and have forbidden Solayby to go to his land.

Last Friday the police stopped him from accessing his land. They told him that if he or his wife steps on his own land, the settlers are going to beat him. On Monday, June 12th, the police told him to go to the Police station and asked him to bring the deeds for the land. He obtained the official papers from the municipality and the land court, showing his family’s ownership since the Ottoman empire period. Although he has all the correct documents, they said he is not allowed to go anymore. Solayby told them, “I will go on the land because it is my land not the settlers’ land”.

He has 200 dunums (50 acres) on the wadi Abu Reesh. The settlers bring their sheep to his land to graze, and these sheep eat the new growth on his grape vines, fruit and olive trees, destroying many. The settlers have pushed over many of the grape vines and destroyed them. In the last week, they have become more aggressive and have continued to threaten him when he enters his land.

Solayby has 200 dunums of land on the wadi Abu Reesh. The settlers bring their sheep to his land to graze, and the sheep eat the new growth on his grape vines, fruit and olive trees, damaging them. The settlers have also overturned many of the grape vines, destroying them completely. In the last week the settlers have become more aggressive, threatening him when he enters his land.

He has contacted the mayor of the municipality who told him that he can’t do anything to control the settlers or the police, and that the best thing, and maybe the only thing to do is go with internationals and/or Israeli peace groups to the land to face the settlers. 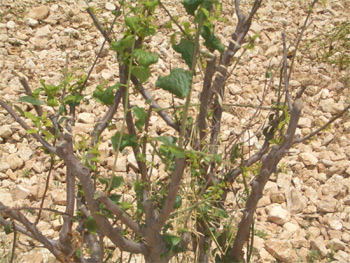