Farmers Fight Against Settlement Control of their Land 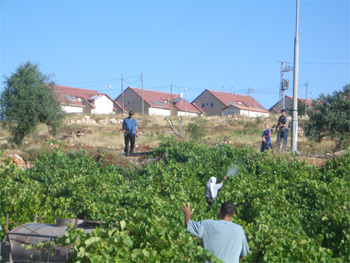 At 7:30am yesterday morning Abu Ayyash and his son Yousef, from Beit Ummar, were accompanied by 3 peace activists in order to go to their land to spray the grape vines with pesticides. Despite Israeli army and settler security forces attempts to stop them, they succeeded in working the land.

On the way to the land we met another farmer, Mahmoud A’akel from Halhul who asked if we could also accompany him. Abu A’akel and one international peace activist never made it to the land and just crossed the settler road when they were stopped by the settlement security. The security guards, equipped with m-16’s, told them that they were not allowed to enter. 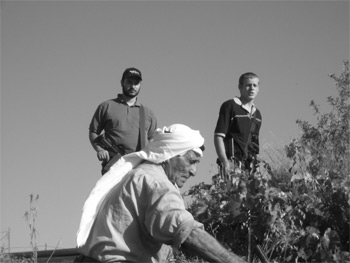 The security then drove to the land of Abu Ayyash and tried to physically stop them from spraying the grapes. Abu Ayyash owns 3 dunums of land that borders the Karme Sur settlement road, which acts as a border to the settlement. The three security guards said we were not allowed to be on the land because we were too close to the settlement. When they noticed that the internationals were taking pictures they became less aggressive and retreated to call for army backup.

The farmers continued to work as the Israeli army arrived. The soldiers said that they must call the DCO for permission to work on their land. They conceded that there was no official order, but said that we couldn’t be on the land. The settler security and the army worked together to agree on a plan that we could stay on the land as long as the army stayed to watch.

The farmers continued to work until all their grape vines were sprayed. Abu Ayyash may not have a chance to harvest the grapes, however, because the settlement plans to put a wall around the settlement and confiscate most of his land. We pulled out the metal stakes that were marking part of the route of the wall. A soldier told us that his commander ordered them to remove us from the land because it was owned by the settlement. He said that the settlement purchased the land from Abu Ayyash to build the wall. We told him that this was a lie and he has not sold his land or received any money for his land. 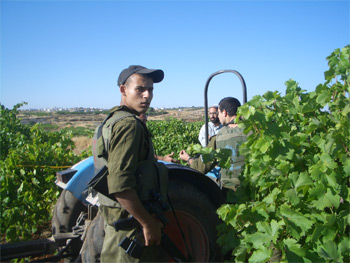 Abu Ayyash has contacted a lawyer to fight this illegal confiscation and plans to continue to fight for his right to work his land.