I decided to take a vacation to Balata refugee camp and give art lessons to children there. I hadn’t been there since the invasion in February and I recently completed a portrait of Ibrahim, a boy who died while I was there and I wanted to give it to his family.

Because of all the roadblocks and closures, just getting from Hebron to Balata is an ordeal in and of itself. I took a service from Hebron to the junction near Bethlehem, another service to Bethlehem to meet up with my friend Chris, we crossed through the Orwellian Bethlehem checkpoint which is built around the concept of no human to human interaction between the people trying to get through and the soldiers giving them permission or not. You can’t see the soldiers, they’re behind tinted, bullet proof glass; you just hear them barking orders over a PA system at you in Hebrew.

Next we took a service to Jerusalem, got off and took another service to Qalandia checkpoint, got off, took a service to Huwara checkpoint. Ah Huwara, my least favorite checkpoint in all of the West Bank. Going through isn’t difficult but coming back out can take hours. Last time our friend Mohammad Farraj, a filmmaker, tried to leave through Huwara on his way to the airport to catch a plane to a film festival in the United States, soldiers refused to let him and told him if he tried to go through again, they’d put him in jail for six months.

All in all, it took three and a half hours from Hebron to Balata, a distance of 40 miles. This was about the best you can expect if you are an international. If you are Palestinian it would take longer.

Balata is a town of ghosts. You walk down any street and the ghosts stare back at you from the walls of all the buildings. These are Balata’s martyrs and this is how the residents of the camp choose to remember them. It’s a strange feeling to come back here and recognize faces of people you never actually met.

We stayed at Mohammad Farraj’s house. He’s a friend of Chris and I’d talked to him via email about coming to the camp and doing art projects with the children. The first person I saw when I walked into Mohammad Farraj’s apartment was Mohammad Issa, the brother of Ibrahim whose portrait I had brought with me. I’d never met Mohammad Issa formally in person but we had corresponded quite a bit over email while I was working on some paintings illustrating life in Balata. He was pointed out to me the day after Ibrahim died and I had never seen anyone with so much pain on their face in my life. I instantly recognized him and introduced myself. I told him I brought the portrait of Ibrahim for him and his smiling face instantly fell. I felt like shit. It took an hour before he finally asked to see it. I couldn’t look at his face for at least five minutes after I gave it to him. He didn’t speak for about five minutes either, he was just staring at the painting. I was trying really hard not to cry and feeling a bit ridiculous since I was sitting in a room full of Ibrahim’s friends and I was the only one who was losing my composure. Nobody said anything for awhile. Finally he told me, “Thank you, you gave me the feeling that he was alive again. It’s amazing.”

Ibrahim is the only person I have painted a picture of in life and in death. I never got a chance to scan the portrait I gave to his brother. Maybe next time I am back there.

Later we went to Mohammad Issa’s house and he gave the painting to his mother. She thanked me and told the story of how he died, how she heard screams and found him on the roof with his best friend who was killed by the same bullet. Her other son was also with them, he had been shot in the leg. Mohammad Issa asked very matter of factly, if I would like to see the pictures of the two boys at the morgue. It was almost as if he was asking if I would like tea. I don’t like to see pictures of dead people but I felt like it would be rude to say no. Their eyes were half open.

After leaving the Issa’s house we went to the neighbor’s of Mohammad Farraj. They were a very sweet family who made us coffee and asked us how the situation in Palestine is reported on in the US. I told them people have absolutely no idea what is going on here. It never ceases to amaze me, the warmth and friendliness of people I meet in places like this. There’s not one family in Balata that doesn’t have a horror story of their own, yet they are so kind and welcoming. Ahmad, one of the sons, about 15 years old is missing all of the teeth on the right side of his mouth where he was hit with shrapnel. His face is also mildly disfigured.

There was gunfire on and off all night. Mohammad Farraj promised nonchalantly it was only Palestinian fighters shooting in the air. At some god-forsaken hour we all woke up to the sound of a bulldozer. I never found out what that was about.

The next day at about 10 AM we bought felafel sandwiches for 11 boys and girls, put them in two taxis, drove them out of the refugee camp to a playground in Nablus where I gave them an art lesson.

I asked them to draw pictures of their daily life and this is the result. It was heartbreaking and at the same time it was really fun to be able to give these kids something fun to do, something they were so grateful for and also to be able to play with them in the park. We all had an great time. It was a much needed break.

I’m sitting here looking at these adorable kids and I’m wondering if any of these boys are going to live past 30.

Haroun says:
“I drew the army and the martyr Khalil and some boys who threw stones at the jeeps and the sun.”

Amal says:
The soldiers killed someone who is sitting in front of his building. And some helicopters were shooting the building.” She wrote: “We will return to our homeland and our original life.” 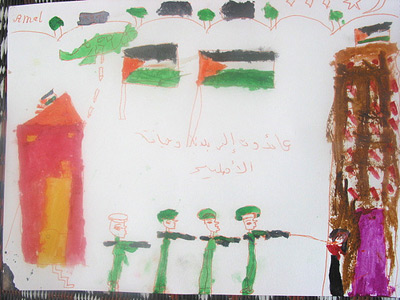 Noor says:
“I drew my cousin who was killed by the Israelis. Some men are carrying the Palestinian flag.” She wrote “occupied Palestine”

Asil says:
“I drew houses very close to each other. There are some soldiers who killed a martyr and soldiers who would not let the ambulance take the martyr away. People in the building are crying.” 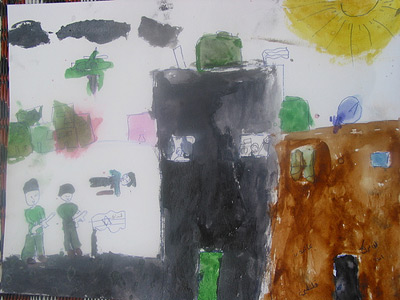 Dalia says:
“I drew my house, a tree, a Palestinian flag, Israelis, jeeps, two people, a martyr and a sun.” She wrote: “The sweetest flag is the Palestine flag, we hope the situation is fixed soon, inshallah. My mother, don’t cry, the days will come back to Balata camp.” 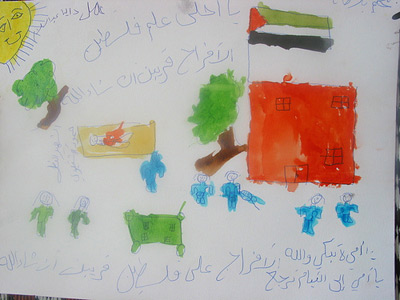 At 4pm we left Balata. I plan to continue doing art lessons with the kids here. If anyone is looking to save the world I urge you to come to Balata and start a summer camp there for the kids. They need it so much.

Ahmad the 15 year old neighbor of M.F. walked us to our taxi. He had a necklace around his neck with about six tiny pictures in it, sort of like a locket. I asked him about it, he said they were his friends.

I knew they were all dead.