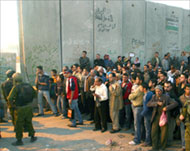 by Khalid Amayreh in the West Bank for Al Jazeera.net, Sunday 11 June 2006

According to Palestinian human rights organisations, the new restrictions involve barring Palestinians carrying foreign passports, including those married to a Palestinian spouse, from re-entering the West Bank after leaving for their adopted country of citizenship, even for a brief visit.

The new measures also affect long-time foreigners residing in the West Bank such as college professors, NGO employees, religious figures and naturalised spouses of Palestinian residents in the West Bank.

Adel Samara is a noted Palestinian economist residing in Ramallah. His American wife wants to go the US for a visit. However, because she is married to a Palestinian, she is worried that the Israeli authorities wouldn’t allow her to return to her family once she left the West Bank.

“I really dont know why they are doing this to us. I am sure there is a special think-tank in Israel specialised in devising and inventing creative ways to make us suffer,” said Samara.

Samara believes Israeli military authorities were targeting ordinary people, most of whom are not politicised and leading a normal lives with their families and friends.

“There are hundreds of cases. You see, I am barred from travelling abroad for so-called security reasons and my wife won’t be allowed to return to Ramallah if she left the West Bank even for a brief visit to Jordan next door.” 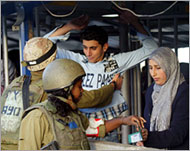 Even spouses of Palestinian residents are feeling the heat

Aljazeera.net tried repeatedly to get the Israeli army spokespersons to clarify policy with regard to foreigners staying in or wanting to enter the West Bank.

A spokeswoman for the Israeli interior ministry said Israel had the right to bar whoever it wanted from entering the “territories”.

She said: “Those wishing to enter must apply for a permit and their application could be either accepted or rejected.”

According to sources at the Bir Zeit University (BZU) in the West Bank, Israeli measures are also targeting academics and lecturers working at Palestinian universities, whether foreigners or Palestinians carrying foreign passports.

At least two professors and an administration official at BZU have been barred from returning to the West Bank without any explanation.

One of the three is Sumaydi Abbas, who holds Swedish citizenship. Aljazeera.net could not locate Abbas, but Ghassan Andouni, public relations officer at BZU, said the Israeli military authorities refused to allow the Palestinian professor to return “because he didn’t have residency rights”.

“You see, they wouldn’t even give him a tourist visa to enter his own country, his own homeland. They view Palestine, including the West Bank, as Israeli territory and us as foreigners.”

Bahjat Tayyem, who holds US citizenship and teaches at the BZU political science department, was recently turned back at the Jordan border while trying to enter the West Bank at the Allenby Border crossing.

“I think Israel wants to effect a total siege on us, a total isolation. They are not content with physical isolation which this evil concrete wall embodies,” said Anduni.

Andouni accused the Israeli military administration of trying to “empty the West Bank of foreigners”, especially those working at NGOs as well as peace activists.

“They want to reduce our towns and villages to inaccessible detention camps and large open-air prisons until we succumb to their bullying or implode from within.”

Israeli authorities have also barred international peace activists which they consider sympathetic to the Palestinians from entering the West Bank.

The International Solidarity Movement (ISM), which brings to the West Bank peace activists from around the world to encourage Palestinians to adopt non-violent means in their struggle against the Israeli occupation, seems to have been blacklisted.

ISM activists have been for years holding peaceful demonstrations and sit-ins against Israeli repression of Palestinians, including the construction of the separation wall and the bulldozing of Palestinian groves and farms.

Some Israeli officials, especially within the foreign ministry, believe ISM activities have been instrumental in getting a British union of university teachers and a Canadian workers’ union to boycott Israel. 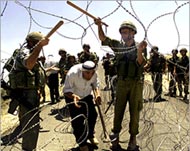 According to Larudee’s lawyer, Gabi Lasky, the Israeli authorities gave no explanation why her client was incarcerated.

However, according to the Jerusalem Post, Larudee’s name appeared on a Shin Bet [Israel’s main domestic intelligence agency]-compiled blacklist of foreigners identifying with the Palestinian struggle.

The paper quoted unnamed Israeli security officials as saying that Larudee was an ISM leader who took part in anti-Israeli demonstrations during the Israeli army assault on the West Bank between 2002 and 2004.

“This person is a danger to the state. He is one of the ISM leaders who had been involved in anti-Israeli activities and therefore will not be allowed into the country,” the security official was quoted as saying.

Lasky said Larudee visited Israel and the occupied territories four times and had never been arrested. She dismissed the security official’s explanation as “dubious”.

“To blacklist non-violent peace activists as ‘person non grata’ raises questions regarding the sincerity of Israel’s intentions to resolve the conflict with the Palestinians through dialogue and non-violence,” an ISM statement given to Aljazeera.net said.

Tagged with: BDS Denial of Entry