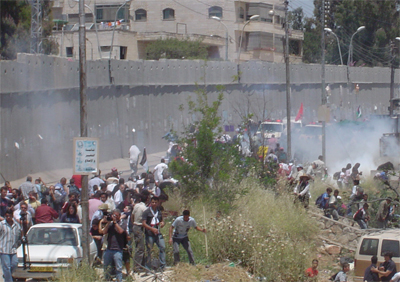 Saturday 13th May: Around 800 Palestinian and 200 Israeli and international demonstrators, representing a broad coalition of people, united in a march to call for the dismantling of the Apartheid Wall in the Palestinian town of Ar-Ram, just north of Jerusalem. With the participation of schoolchildren, teachers, neighborhood residents and representatives of all the different Palestinian political parties, it was carefully prepared as a non-violent protest. It was well disciplined, with a line of organizers at the front of the march preventing any impatient youth from provoking a confrontation with the soldiers.

The large, peaceful march was headed by a children’s marching band. Despite this, it was violently attacked when Israeli Border Police shot round after round of tear gas at the demonstrators as it approached a checkpoint, forcing demonstrators to flee for cover in nearby homes. Chief Muslim Cleric, Sheikh Taiseer Tamimmi, Palestine Chief Justice, was among the injured, IMEMC reported. A few children in the crowd then responded with rocks to the tear gas attack. As is their standard practice, the Border Police afterwards lied to the press, saying that they were attacked by the demonstrators, and it seems that all the press (including al-Jazeera) took their lies at face value. We have photos and video footage proving that the demonstration was peaceful and was attacked by the Israeli soldiers. 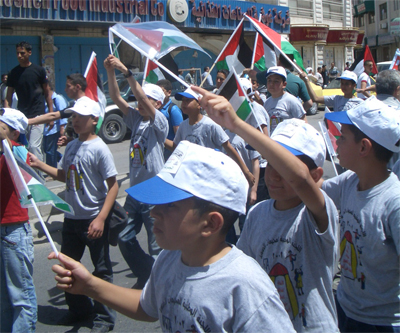 The Border Police continued to shoot tear gas preventing protesters from regrouping. They also denied the entry to many Israeli activists through Ar-Ram checkpoint from Jerusalem, forcing some to crawl through the fence and others to hold a solidarity protest on the other side of the fence. 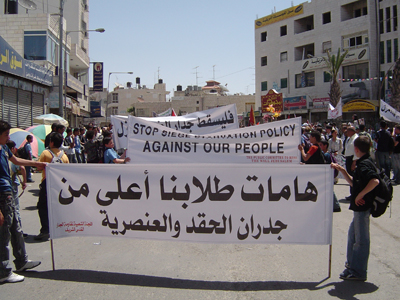 In conjunction with the regular Israeli police, the Border Police arrested 11 people – 7 Palestinians and 4 Israelis, including one man who it seemed was arrested for carrying the Palestinian flag. They also confiscated the protestor’s signs saying they wanted them “for evidence”. The three Israelis were all released that afternoon, but all the Palestinians were accused of stone throwing (supposedly “endangering people’s lives”) and participating in an “illegal protest”. They were taken to the Russian Compound jail in West Jerusalem and held overnight. All seven were released today (the 14th) on condition that they will have to return to court if the state decides that they will be procede with prosecution. 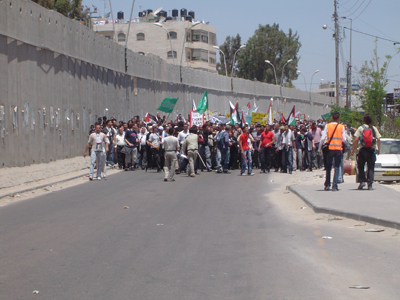 The Wall divides the main street of Ar-Ram in two. Contrary to the myth popular in the Israeli and international press, the main effect of the Wall is to divide Palestinians from each other, because it is built within Palestinian territory, and not on the internationally recognized 1949 armistice border, or “Green Line”. It has critically damaged the life of the residents of Ar-Ram. It has divided families, stopped workers from reaching their workplace and cut off teachers and students from their schools; in fact, three schools have already been forced to close. 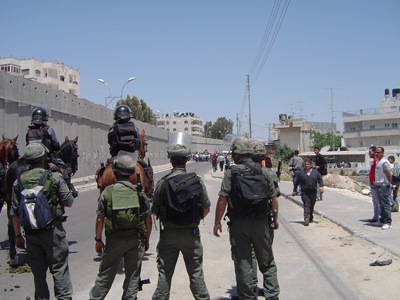 The mayor, Sirhan Al-Salaimeh, stated after the demonstration that Palestinians will continue their joint activities with Israelis and internationals against the occupation and the wall and for a peace that is just for both peoples. 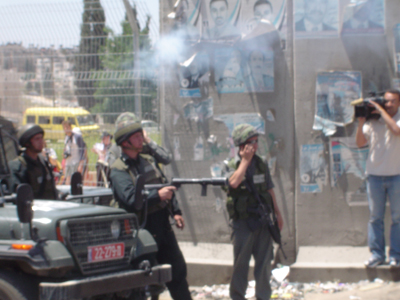 This was a continuation of demonstrations organized by a broad coalition of forces in the Jerusalem area including: the Ar-Ram Counsel, the Public Committee to Resist the Wall in the Jerusalem district (which represents districts and villages surrounding Jerusalem on both sides of the wall), the Concord for Jerusalem, the Islamic and National Parties in the Jerusalem area, the Palestinian National Initiative (former Presidential candidate and Palestinian MP Mustafa Bhargouti’s party), The Stop the Wall campaign, the International Solidarity Movement, Anarchists Against the Wall, Gush Shalom, Ta’ayush, and other Israeli peace organizations.

Two videos from the demo:

For more information or to arrange for video footage contact:
ISM Media office 02 297 1824