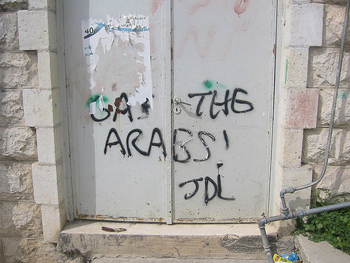 22 April- A gang of 30 militant Israeli settlers attacked a Palestinian grocery shop today, and assaulted the owner’s son and several others.

The settlers flung sharpened metal bars as “spears” through the open doorway smashing produce jars and knocking goods from the shelves. They also threw stones, punched and kicked a group of Palestinian children playing just outside, and assaulted Radi Abu Aeshah (16) who is the owner’s son.

International Human Rights workers were also attacked when they stood between the shop-front and the gang. The settlers only stopped when confronted by soldiers from the Israeli Army. The gang, composed of teenagers and older boys all in Orthodox Jewish dress of white shirts, black pants, and skull-caps and led by an adult man, then moved off into a near-by
Palestinian olive grove, where several Palestinian families live.

Tension had been building in Tel Rumeda all afternoon. Settler children spat at, and verbally abused human rights workers in the mid afternoon. A group of seven teenagers then threatened the same workers, and were overheard complaining that they were “not enough,” to make a successful attack. The teenagers, who were unaware some of the HRWs spoke Hebrew, said they would meet at the home of Baruch Marzell, founder of the ultra-extremist Chayil Party (Jewish National Front) to make a plan.

Some hours later, at approximately 3:45pm, the gang marched through Shuhada Street, in the old city near the illegal settlement of Beit Hadassa. They then turned left just before the Army checkpoint and marched up the hill where they attempted to attack some human rights workers who had become concerned for local Palestinians’ safety. The HRWs were backed up against a
wall and only saved by the intervention of a squad of Israeli soldiers who happened to be patrolling at the time. The gang continued up the hill, where the attack on the shop, owned by Hassin Abu Aeshah, took place.

The settlers have a long history of violence and intimidation against the Palestinian population of Hebron, but the Passover holiday period has seen a dramatic rise in the number and ferocity of their attacks. During the weeks around Passover, the settlers receive thousands of visitors, some of whom join-in attacks on Palestinians, Palestinian property, and the HRWs who attempt to protect them. Attacks have become common. HRWs report an average of two to three attacks occur each week in Tel Rumeida. Today’s attack was the third such organized attack to occur on Shabbat.