The story of Saeed Abu Salah 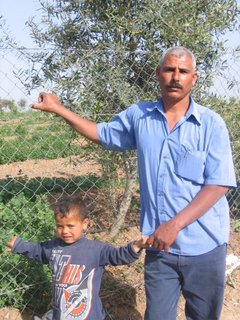 Saeed Abu Salah is a patient man. Judging from all he has endured during the past four years at least. Abu Salah-40 years old with graying hair and eyes the color of chestnuts, and 20 children from separate two marriages-lives in Gaza’s northernmost region in the farming town of Beit Hanun-nearly as far north as you can go without being killed as so many have.

He is less than a kilometer away in fact from the border with Israel-and the fence and wall that bulldozers, active even as we spoke and visible in plain distance, were building.

Directly across from his house, at the end of an unpaved dirt path that used to lead to his 40 donom cattle ranch and citrus groves-now inaccessible and razed to the ground- is an Israeli lookout tower, resting atop a large mound of sand just across the border. It is equipped with a camera that monitors the family’s every move even as we speak, and a sniper, who every now and again fires “warning” shots at us.

“He doesn’t like you being here, as a journalist. Its normal-he shoots day and night, but particularly when visitors come” explained Abu Salah matter-of-factly, of the unseen sniper, whom he talks about with unenviable confidence and the seemingly intimate knowledge of a close acquintance.

Still, Abu Salah is unflinching in his determination to stay put, asserting that he will only allow Israeli troops to drive him out, which he says they have tried to do so many times before, “over his dead body”.

The UNDP estimated the damage done to his farm, which one employed over 30 Palestinians, at nearly half a million dollars. All he got in return was a zinc-sheeted shed, shielding little more than a wounded horse. “We just can’t afford to buy any more cattle. Or plant any more trees. Why should we? The Israelis will just destroy them again,” he says, staring at the forboding and ever-present tower in the distance. His family used to be self-sufficient, but since his farm was razed, he now has to rely on working for a local contractor once a week for money.

He greets me with tea and sweet, strong coffee as he displays his “museum of Israeli war artifacts”-a room full of 55kg tank shells that we can barely lift together, which he has decorated with artificial flowers; an arch, neatly trimmed with a line of Israeli bullet casings; and a photo album he keeps of all the damage done to his ranch-including his sniped cows, lying dead alongside each other, their intestines spilling out of their bloated stomachs. 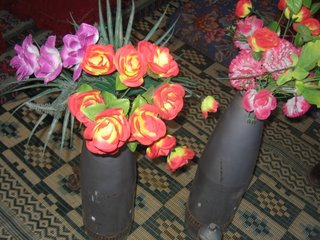 “It’s as if they wanted to say, ‘this could be you’” he said, his young children peering through the iron-barred window in front of us, and the smallest, piercingly blue-eyed child giggling under his arms. “They used to be so afraid-the young ones still are. Now, they have gotten so used to it that if we don’t hear shelling, we think something is wrong. They are always firing at us, and when not firing, then shelling, and when not shelling, hovering over us with F-16s and drones, mocking us, provoking us, trying to show us that we are surrounded from all sides and that we have to eventually leave.”

There are no clinics where he lives. No grocery stores. Nothing is allowed. His wife is expecting anyday now, but Abu Salah is worried an ambulance may not be allowed in.

“Since Israeli forces declared the area-including my home, a buffer zone a few months ago, dozens of heavy shells fired by either Israeli tanks or warplanes have fallen in the area, wounding my 21-years old son Eid in his right arm, inflicting severe damage to my modest house and casting panic in my children’s’ hearts” explained Abu Salah, lifting his son’s wasted arm, left with little more than base muscle and stubs of fingers.

“I am not a Hamas supporter, but let me say that we’ve given enough concessions-and whole decade of concessions for free. The PLO decided to recognize Israel and what did recognition bring us? Have them recognize our rights first, our freedom to live, our right of return, then surely, we will recognize their rights.”

At night, Abu Salah and his family become prisoners in their own home, unable to move for free of being shot by the faceless sniper.

“This is our existence. This is our reality. This is our fate. And we will bear it out, but never another hijra (exile)-I will stay here till they bury me in my grave.”

For more of Leila’s writings from Gaza her blog